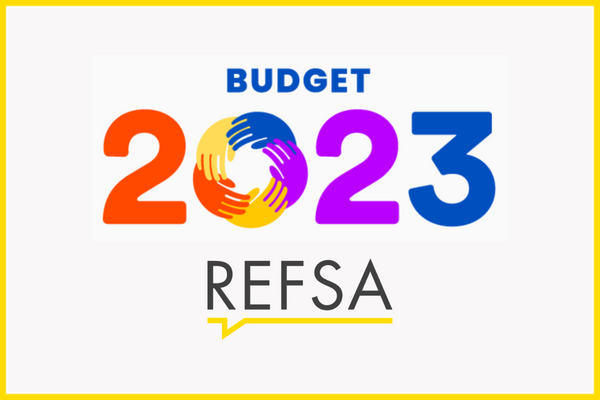 Budget 2023: defunct but a chance to take civil society’s feedback into account

On October 7, Finance Minister Tengku Zafrul Aziz unveiled Budget 2023. Unfortunately, the budget was effectively rendered void just three days later due to the dissolution of Parliament, which creates uncertainty for households and businesses in the country. Nevertheless, REFSA’s views on the now defunct Budget 2023 are still relevant and form useful talking points for the post-election iteration of the budget.

Overall, REFSA’s initial impressions were that it was a moderate and largely unremarkable budget. The proposed budget also tried somewhat awkwardly to balance the competing demands for short-term assistance (as well as goodies ahead of the impending elections) and growing calls for fiscal consolidation. This led to inconsistent policy proposals like the reduction of subsidies on the one hand and a 2% point cut in the income tax for the middle class on the other hand.

In Astro Awani’s segment ‘Consider This: Budget 2023 – Elections or Economics’, executive director Tan E Hun highlighted that the budget had no major surprises in terms of the allocation of immediate support for vulnerable households and also no significant big-ticket reform items, suggesting that the government has not fully translated its lofty transformation plans through its budgetary measures.

At the same time, she stressed that Budget 2023’s ‘business as usual’ approach for the year ahead suggested a degree of overconfidence in households’ ability to manage future disruptions, including rising interest rates and a heightened risk of recession. In particular, E Hun questioned the accompanying Economic and Fiscal outlook reports, which formed the bedrock of Budget 2023’s context, for assuming ‘better employment and wage prospects’, and by extension tax revenue collection, in the coming year, particularly in light of the announced tax cut.

It is also important to remember that the forecast decline in the fiscal deficit to GDP ratio, which the Ministry of Finance touted as proof of the government’s fiscal responsibility, rested on the assumption of average nominal GDP growth at 6.4% in the next 3 years, alongside improved revenue collection as mentioned above. Given the extent of the impact of global headwinds, such as geopolitical tenses and crises abroad, the claim seemed fragile at best and may have to be revised in the near future.

E Hun also welcomed the overdue implementation of the Tax Identification Number as well as the proposal to study the introduction of a carbon tax, as REFSA had discussed in its pre-budget statement.

Meanwhile, researcher Jaideep Singh emphasised that the budget did not pay enough attention to long-term structural changes in the labour market despite ‘reform’ being one of the three guiding principles of the document. For instance, reskilling and upskilling initiatives continued to be talked about as in previous budgets, but it remained to be seen how Budget 2023 promised to do things differently in terms of addressing growing graduate underemployment.

In this regard, existing and new employment programmes should not just focus on hard job creation but also the quality and long-term employability of the beneficiaries as part of their KPIs.

On the subject of increased funding for TVET initiatives, Jaideep stated that the programmes must be aligned with industry demands in order to create industry-ready practitioners through apprenticeship schemes, industrial placements and the like. Another useful strategy would be to ensure that TVET centres are region-specific, with each training centre focusing on the area’s comparative advantage, such as E&E in Penang.

Ultimately, despite the goodies on offer for the youth demographic, including the RM200 e-wallet credit, the young people of this country broadly face considerable challenges earning a living wage.

To resolve this issue, Jaideep highlighted that the government should develop strategies to attract high quality FDI (and therefore increase the supply of high skilled jobs rather than the current ecosystem dominated by low skilled foreign workers) from MNCs; increase the number of industry-ready STEM graduates (as there is demand in value-added sectors like E&E for engineers and technicians) and strengthen our capabilities in IR4.0 among others. Unfortunately, the original Budget 2023 did not go far enough in this area.

Moving forward, even though the budget will take a backseat in the coming weeks due to the focus on the upcoming election, REFSA urges the soon-to-be incoming administration to take note of feedback from our think tank and the rest of civil society in order to improve the budget that will be tabled and approved for 2023.

Read our media statement in Bahasa Malaysia and Chinese (to be added).