REFSA is a progressive, not-for-profit think tank that promotes social advancement in Malaysia. Since its inception in 2004, REFSA has been at the forefront of policy discussions and debates in the important political and socio-economic issues of the nation. Today, our aspiration hasn’t changed – we want to power the movement for a just, inclusive, and multiracial society.

To achieve this, we strive to:

What is social advancement?
To put it simply, it is to make people’s lives better. We believe that us Malaysians, regardless of race, religion or cultural background, have common aspirations and are seeking the same things in life. REFSA seeks to participate in and shape discussions that aim to create betterment for everyone.

we present reliable and relevant analytical studies that contribute to understanding the socio-economic challenges faced by the nation. We evaluate and analyze current public policy challenges to propose forward-looking, sustainable solutions.

through our work, we hope to improve the level of understanding on complex topics, thereby encouraging and enabling everyone to discuss and participate in an open dialogue.

we engage with the public, policy-makers and legislators; and promote platforms for open and constructive discussions.

Looking Back
REFSA was conceived in 2004 on the need to provide thought leadership, promote open discussions and develop reliable analysis on pertinent issues affecting Malaysians.
Since 2007, we took our advocacy role one step further by becoming a publishing house and since then, we have produced books and publications on important political and socio-economic issues.
In 2016, the Library for Social Democracy was conceived as a brain trust and resource centre to complement the think tank’s research. It has since been one of the few public centre of research for academicians, politicians, researchers and the wider discerning citizens interested in local and global society, politics and economics.  It also acts as a public space for educational outreach, as well as to bring the community closer through knowledge sharing and intellectual pursuits.
Throughout the years, we have focused on various areas, most notably democracy, governance and reforms, economy, urban, to name a few.  We are also one of the few trilingual think tanks in the nation – our work and media engagements are frequently carried out in all languages – Malay, English and Mandarin.
To this date, we are well represented in discussions, dialogue and engagement with various stakeholders of the nation, and has come to be regarded as a serious participant in the advocacy of progressive ideas towards nation-building.
2020 HIGHLIGHTS
2020 has been a challenging but fruitful year for us in REFSA.
It has provided great opportunities for us all to reassess, re-evaluate and reflect on the challenges that our society will face in the coming years, and reaffirm our determination to fight for a future that is more equal, more just and more sustainable.
Our work in 2021 will continue to tackle the inequalities inherent in the current economic and socio-economic systems, urban ecosystems and political institutions of Malaysia.
View REFSA Annual Report 2020
View REFSA 2020 Highlights 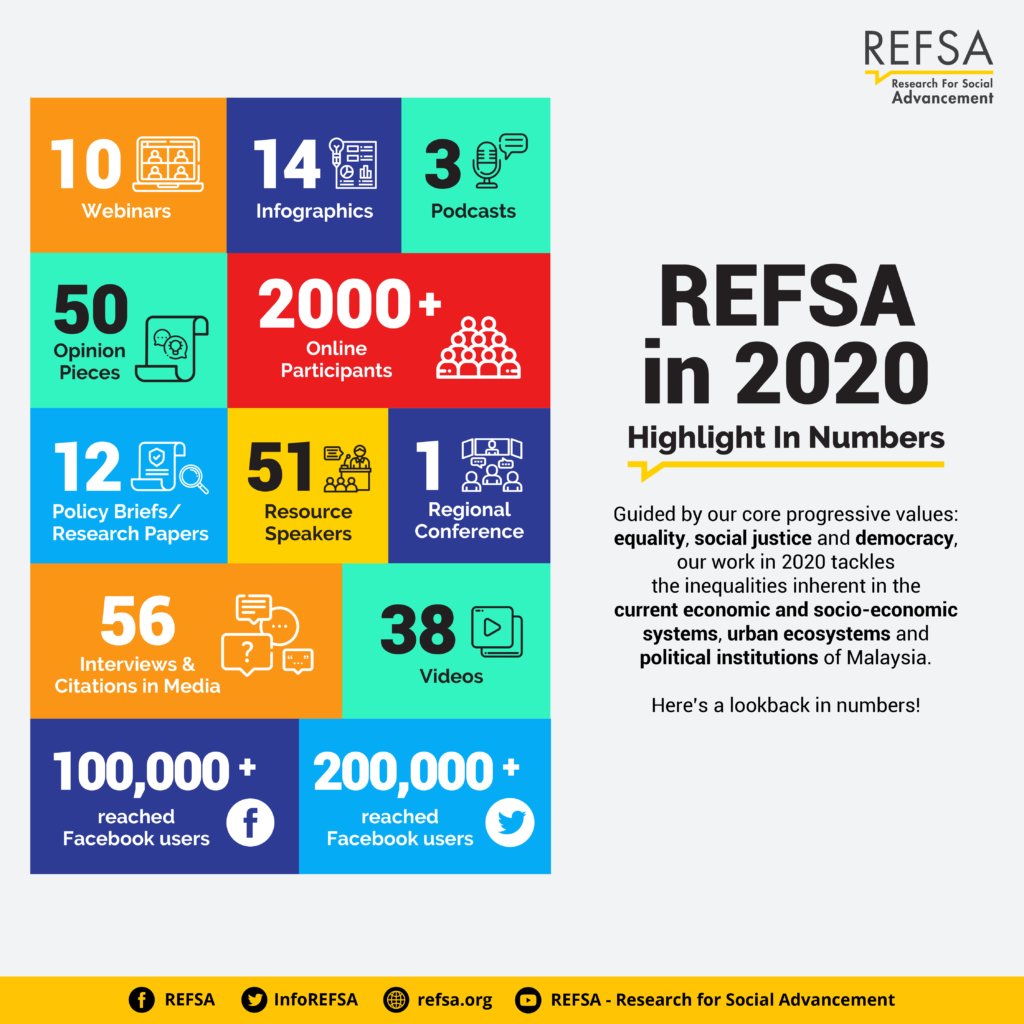 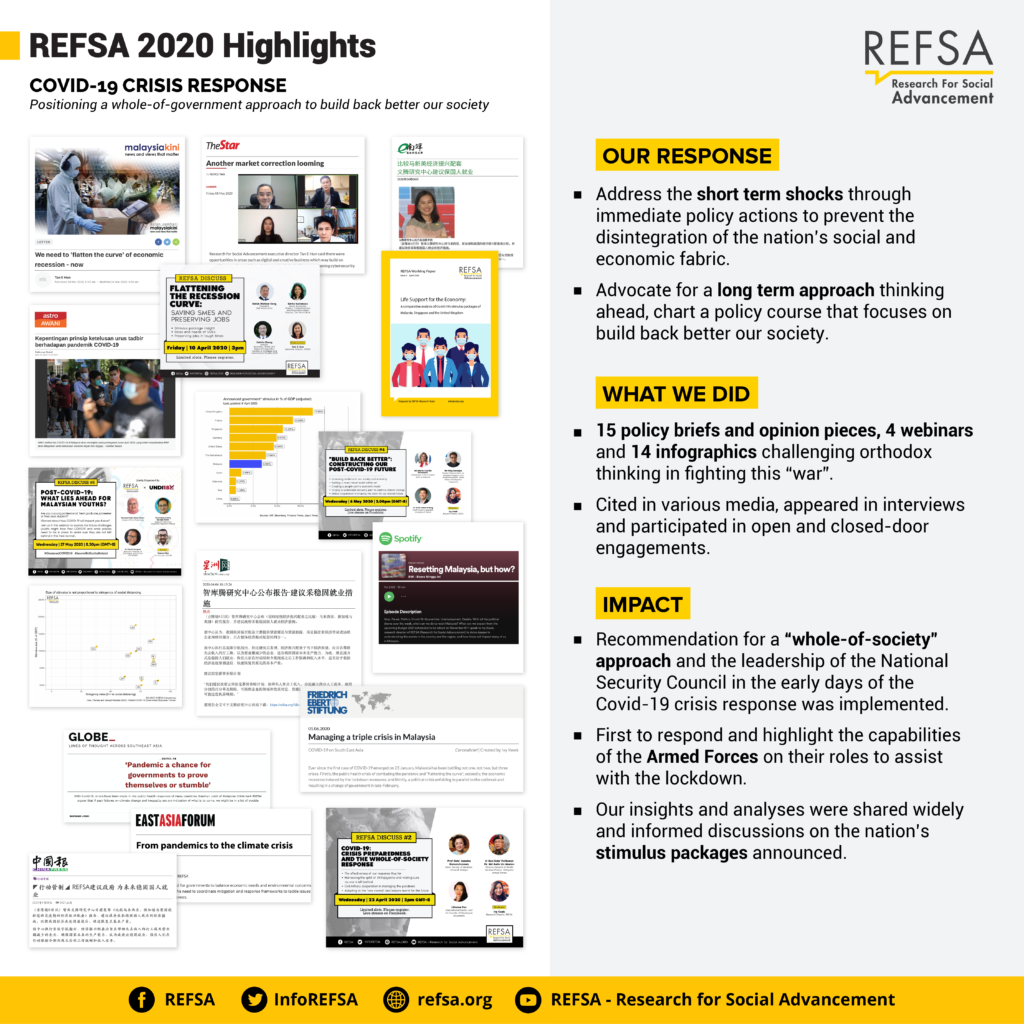 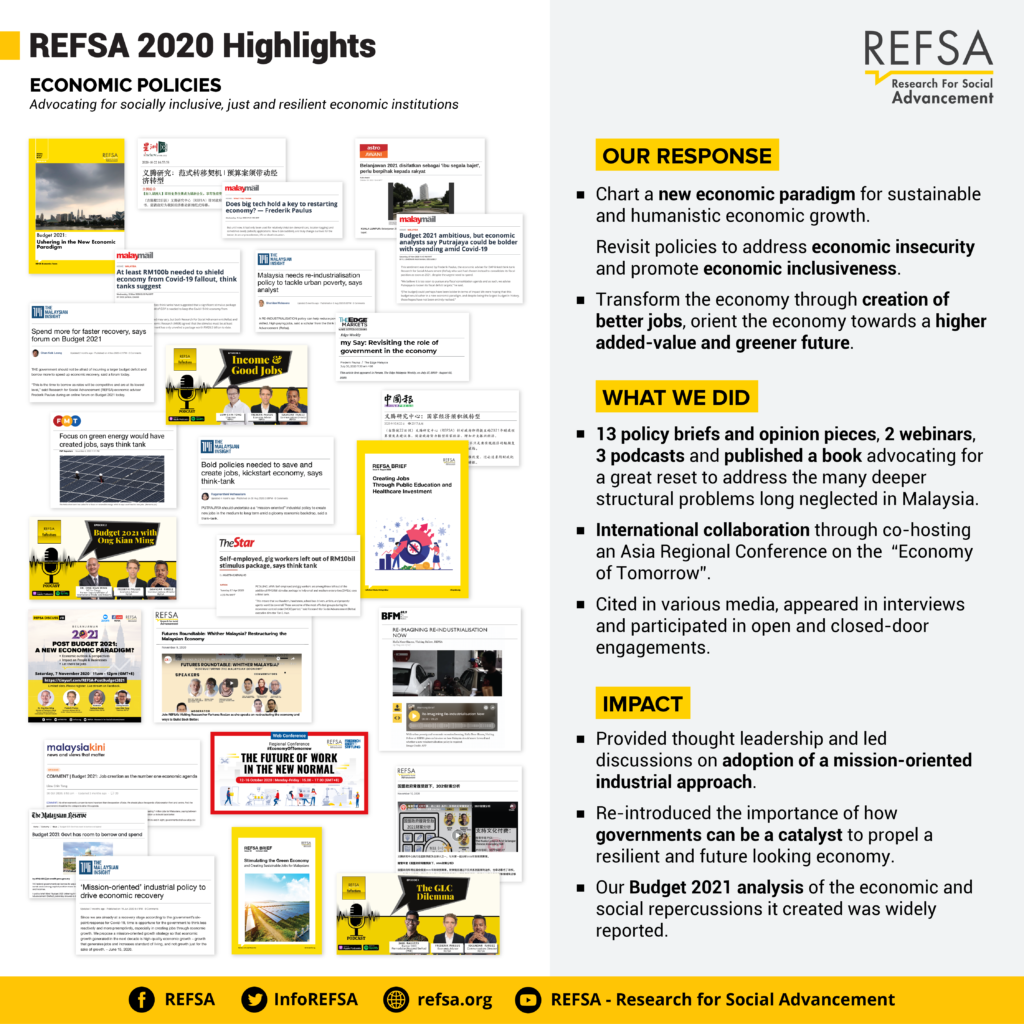 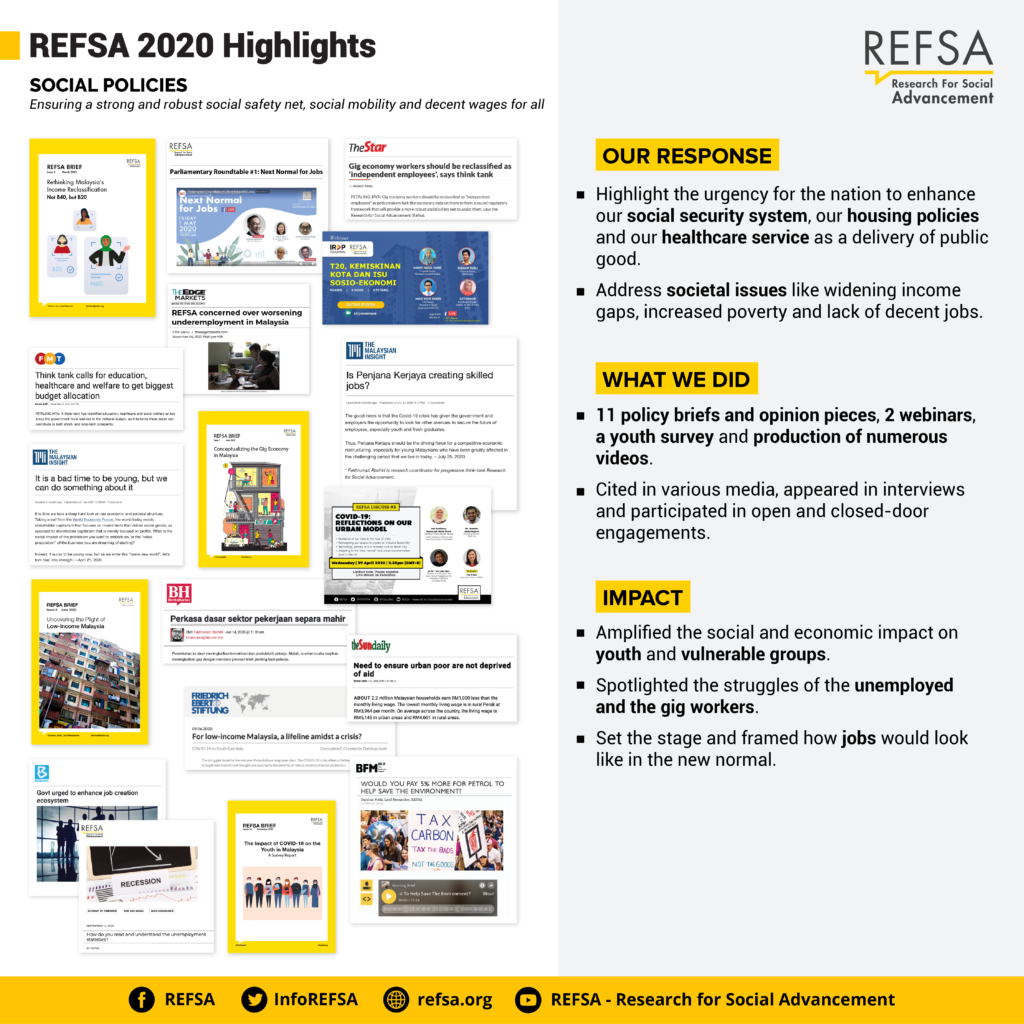 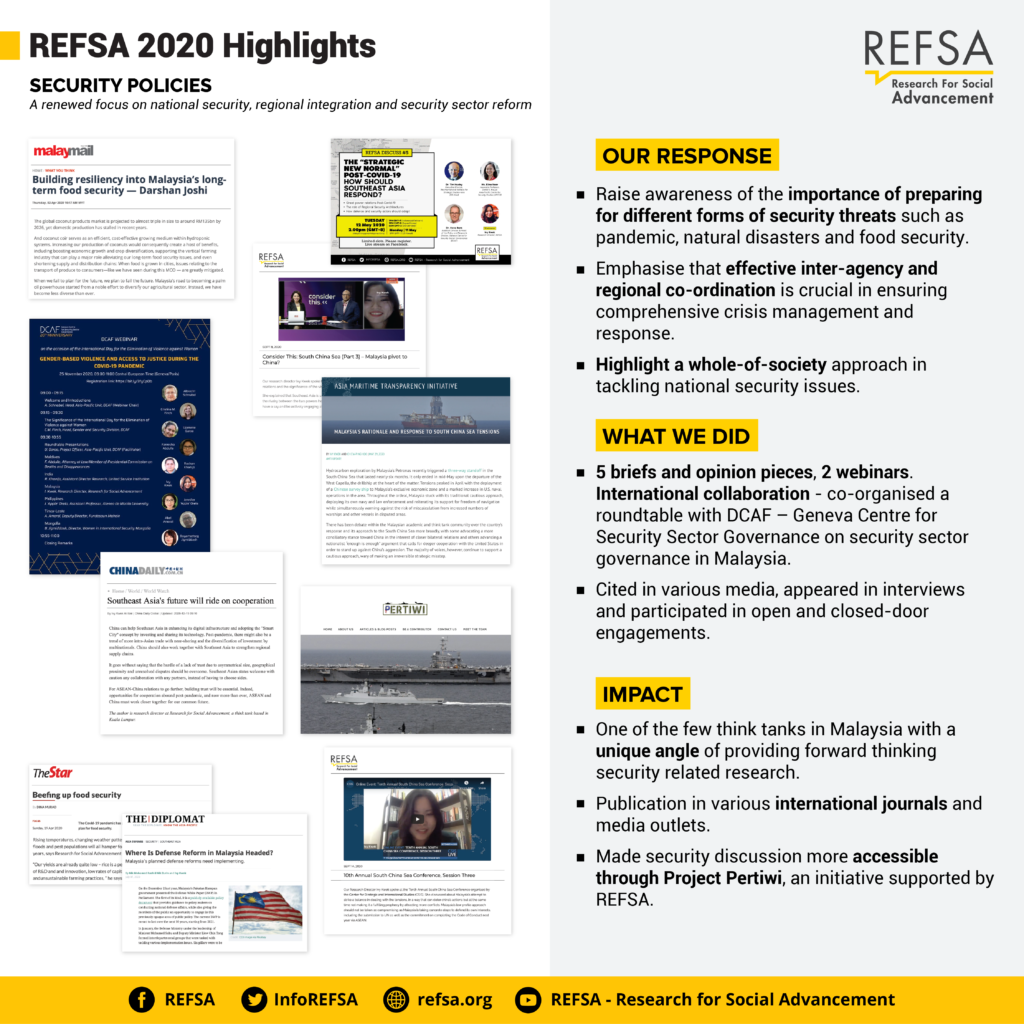 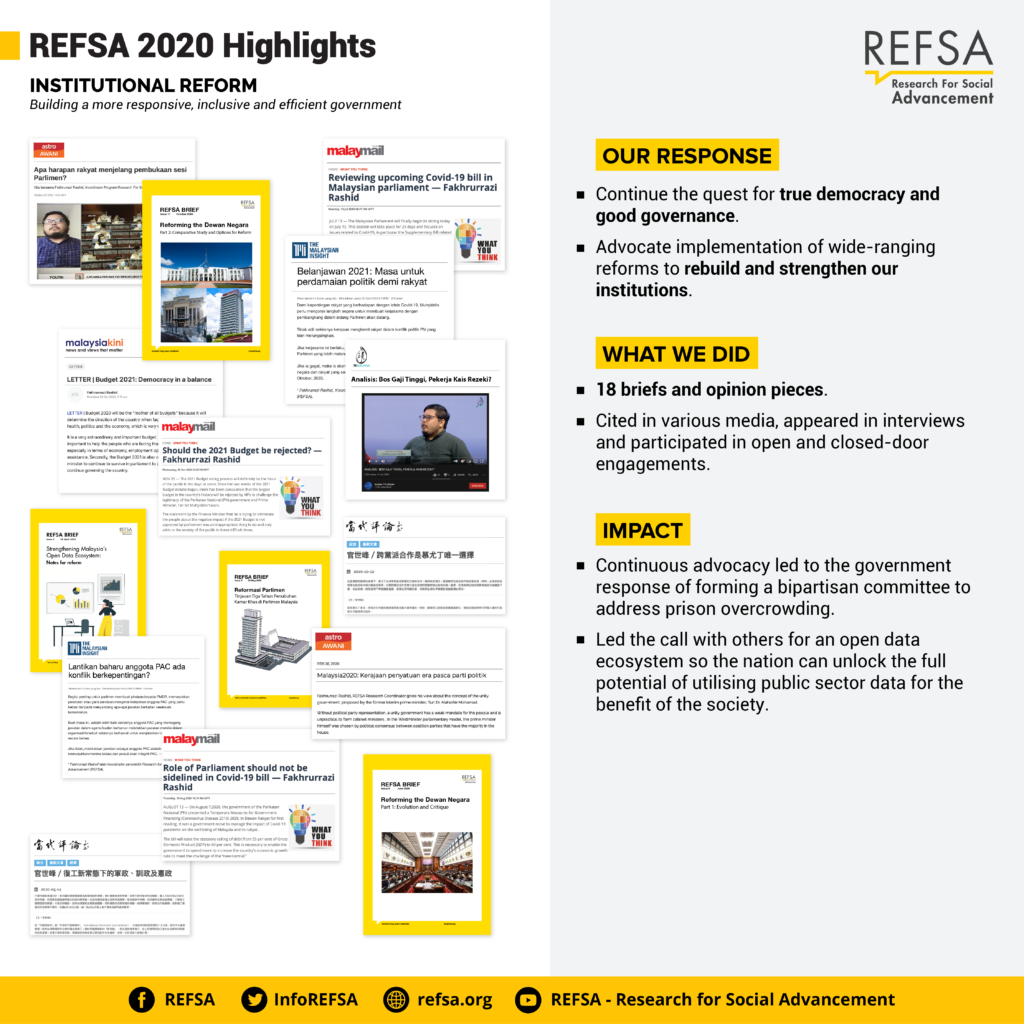