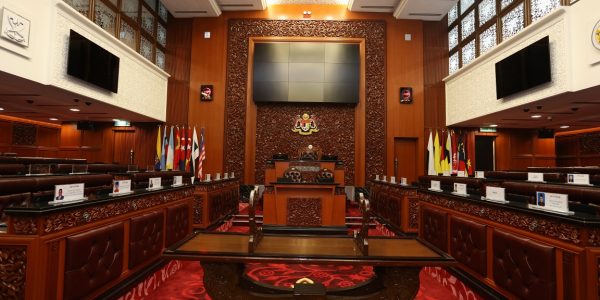 Since the implementation of the movement control order (MCO), Malaysia’s economy have been greatly affected by Covid-19. The Department of Statistics Malaysia (DOSM) Malaysia forecasts Malaysia’s unemployment rate this year to reach 5.5 per cent, higher than the unemployment rate during the 1997 Asian Financial Crisis which was 3.2 per cent.

The Social Security Organisation (Socso) report which looked at the first quarter of the country’s labour market in 2020 shows that the number of unemployed workers has increased to 42 per cent during the MCO. Most laid-off workers are low-paid, young workers.

There have been suggestions from various parties to hold an earlier parliamentary session or full meeting to discuss the Covid-19 issue. However, the federal government decides that parliament will convene on July 13, 2020.

The delay in parliament will cause issues when the Covid-19 cannot be curtailed early.

Recently, the House of Lords (UK’s upper house) convened meetings with its members to discuss the country’s economic recovery plan. This was a general debate of the House of Lords to draw the UK government’s attention on issues such as job retention scheme, national living wage, and the National Health Services.

The question is, why has the prime minister decided not to hold a special sitting of the Dewan Negara (Upper House) to debate the issue of Covid-19 if the House of Representatives (Dewan Rakyat) cannot function?

The Dewan Negara Standing Order (SO) 10 (3) states that the Head of Council, or the Prime Minister, may call a special or earlier session of the Dewan Negara sitting in the event of public issues that require urgent consideration.

For example, in 2018, for the first time in Malaysia parliament history the Dewan Negara convened simultaneously as the Dewan Rakyat. The then BN government, led by Datuk Seri Najib Razak decided to carry forward the upper house sitting earlier than usual to ensure the bill passed both houses, as the 14th general election was drawing closer.

Article 66 (2) of the federal constitution allows a bill to be passed by the government that may begin in Dewan Negara or Dewan Rakyat. However, bills relating to finances such as the annual budget and economic stimulus package cannot be initiated or amended by the Dewan Negara under Articles 67 and 68 of the Federal Constitution. However, this does not prevent the Dewan Negara from carrying out the checks and balances on government in light of Covid-19.

Standing Order 64 (1) clarifies that any bill which has reached the third reading of the Dewan Negara may be submitted for Dewan Rakyat’s approval. It is clear that the process of introducing the bill or amending an act does not need to be initiated only in the Dewan Rakyat.

For now, Dewan Negara may initiate the enactment of a new Bill or amendments to the government’s legislation such as the Road Transport Act 1987 (Act 333) on the drink driving penalties.

The amendment may be brought to the Dewan Negara in advance for immediate approval rather than having to wait for the motion to be tabled at Dewan Rakyat. Likewise, the bill relating to the protection of workers’ rights should take similar precedence and brought to the attention of Dewan Negara.

Dewan Negara should rightfully be the “third eye” of any corruption or power abuse possibly committed by any member of the executives as the government’s accountability and integrity cannot be compromised and affected during this pandemic.

This includes reviewing Covid-19 standard operating procedures (SOPs) on reopening of schools and nursery cares to ensure that every SOP is taken into account and that all safety measures are observed to protect the public interest against the deadly coronavirus.

The Dewan Negara has strengthened and improved so much today, when its Reform Caucus chaired by Senator Yusmadi Yusof established the Covid-19 Committee Group last April to monitor government transparency and policy effectiveness during this crisis.

This is a proactive measure to ensure Dewan Negara continue to rise to the challenges of addressing public interest and nation-building.

To date, however, there have been no reports issued by the Covid-19 Committee established by the Caucus. Perhaps because it has not received any attention from the government which prematurely affect its role to perform to its best ability.

My take is that the federal government should cooperate with the Dewan Negara Covid-19 Committee Group as a comprehensive step towards resolving the crisis collectively and then review its reports for further implementation.

It also acts as an approach for the government to respect parliamentary institutions as a vital body towards Malaysia’s governance.

The stability of the Dewan Negara has shown that the institution is stronger in addressing the issues of the people when it comes to the “new normal.” Members of the Dewan Negara consist of politicians and experts in certain fields which can lead to a healthy debate on policy issues rather than political rhetoric which is synonym with the Dewan Rakyat.

Therefore, the sitting of the Dewan Negara must be called immediately to prove that the government is serious in taking the “whole-of-government approach.”

In light of this situation, the Covid-19 has given the lawmakers and political observers the opportunity to relook at the importance that Dewan Negara brings as an important part of the government’s check and balance.

Restoring its function will not only be a step forward to carry out parliamentary reforms, but also ensure that our legislative body can become part of Malaysia’s winning war against Covid-19.