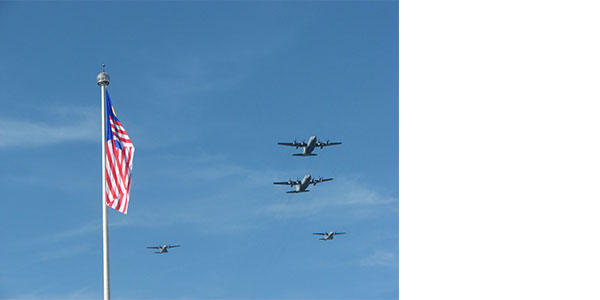 The Importance Of Public Debate On Defence Policies

Traditionally, defence is not a popular topic for neither parliamentarians nor the public. The reasons are multifaceted and complex.

The fact that Malaysia is not a military orientated state and the country faces no immediate security threats are main contributory factors. However, this does not justify the ignorance towards Defence matters. I want to argue that Defence or security issues more precisely, indeed, is as important as other public issues and deserves much more attention, both qualitatively and quantitatively.

First, the Defence sector consumed more than RM 71.8 billion under development budget between 1966 and 2013. This enormous amount of spending equates to the expenditure for 18 KLIA2’s, 14 KLCC towers or 12 North South Highways. The sheer enormity of the sum in itself is enough to call for some checks that under current po-licy, is sorely absent.

Second, all the information related to Defence is classified as top secret and there­by exempted from parliamentary scrutiny. In contrast, the Defence budgets of the United States of America, the United Kingdom, Australia and Japan are broken down into minute details when being tabled to their respective legislatures. Their Defence budgets, despite being much more prominent players on the international stage and therefore hold higher stakes revealing information of military assets, are subject to high levels of debate by their legislators as well as the general public.

The most recent ‘The Transparency of Defence Budgets Report’ published by Transparency International, Malaysia ranked in the category of moderate to low. Guess what? Malaysia shares this not-so-desired ranking category with nations like Afghan­istan, Vietnam, Rwanda, India, Thailand, Tanzania etc. Even more shockingly, African countries like Botswana, Ghana and Kenya are ranked higher than us; and even In­donesia, Philippines, Sri Lanka and Papua New Guinea which are our fellow Asian neighbours manage to score much better transparency rankings.

According to a survey conducted by the Ministry of Defence between November 2008 and January 2009, 50.7% of Malaysians were not confident of the Armed Forces’ capabilities. If Malaysian Armed Forces can’t protect us, who can?

Third, not only does Defence expenditure get classified as secret, even our military shopping list gets accorded this unhealthy secrecy. To be frank, other than those occu­pying the highest echelons of the armed forces as well as the selected few at the top of the Ministry of Defence, no one knows what our tax payers’ money have been spent on in military procurement in the past twenty years. In fact, there is no compulsion for the authorities to reveal the said information, whether in parliament or public.

Fourth, how is Malaysian Armed Forces doing? What is the level of deployment readiness of our Army, Navy and Air Force? How did MH370 fly across the Northern Peninsular Malaysia without being intercepted by our Royal Malaysian Air Force? Why is the security of Eastern Sabah still under-threat? These are all pertinent questions that Malaysians are eagerly asking and deprived of answers.

Fifth, according to a survey conducted by the Ministry of Defence between Novem­ber 2008 and January 2009, 50.7% of Malaysians were not confident of the Armed Forces’ capabilities. If Malaysian Armed Forces can’t protect us, who can? This, in my view is a sad state of affairs and spells a crisis of confidence towards one of, if not THE MOST important public institutions in our nation. Six years have now passed. The Question is; what have the Armed Forces done to improve people’s confidence?

Sixth, as far as I am concerned, it comes as no surprise that the Special Branch of The Royal Malaysian Police Force are covertly and overtly tapping information from Opposition leaders. What seems peculiar however, is the heavy engagement of the Malaysian Armed Forces’ Defence Staff Intelligence Division (BSPP) in collecting polit­ical information. There are two cases which supports this assumption, of which I have written about in Malaysiakini.

First, in July 2006, then premier Dr Mahathir Mohamad was attacked with pep­per spray when he arrived in Kota Bharu, Kelantan, to attend a political seminar. The police immediately arrested dozens of people for investigation, including seven army personnel from the 8th Brigade. But what were they doing there? Second, after the BN encountered its biggest defeat in the 2008 general election, Mahathir held a press conference on March 9, during which he denounced premier Abdullah Ahmad Bada­wi’s under-performance. He also claimed that Abdullah’s refusal to take the advice of the special branch and military intelligence unit not to call a general election, had contributed to the BN’s electoral defeat.

In my opinion, there is ample room for improvements in matters of Defence. For ex­ample, demanding the authority to reveal their shopping list and expenditures will be one priority among many others. Assessing the readiness of forces is another pressing need for the sake of restoring people’s confidence towards the Defence capabilities of our armed forces.

Of course, debating national Defence policy in public is what I love to see, as one of the countless ways to address the above issues. What say you?