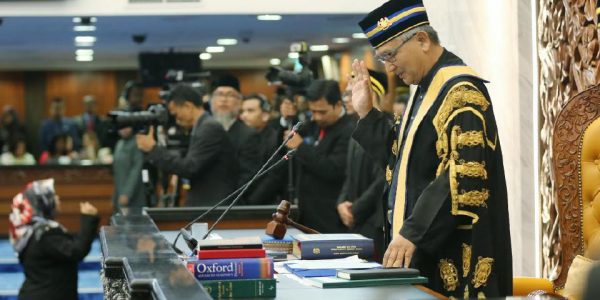 Should a Speaker of the Dewan Rakyat represent the ruling party?

On June 27, 2020, Tan Sri Mohamad Ariff, the Speaker of the Dewan Rakyat, accepted Prime Minister Tan Sri Muhyuddin Yassin’s proposal to terminate the service of the Speaker and his deputy, Nga Kor Ming. The news has generated a lot of reactions and polemics while the country’s political position faces uncertainties and instability.

Tan Sri Mohamad Ariff is the ninth Speaker of Dewan Rakyat since the Malaysian parliament was established six decades ago. His election as Speaker in July 2018 was not challenged by the Opposition who did not propose their candidate as a Speaker.

Although Mohamad Ariff has shown his commitment to parliamentary reform, his position has been challenged after the Perikatan Nasional (PN) government moved to terminate his service as Speaker at the next parliamentary session without clear reasons.

In this context, it is alleged that it was an executive action to dominate the legislative body as the federal government’s position remained unstable and needed to be consolidated in parliament. This move is not only political, but should also take into account the Federal Constitutional and parliamentary conventions that some other democratic countries have practised.

Due to executive dominance in parliamentary affairs for almost six decades under the Barisan Nasional (BN) government, the Speaker often comes from the ruling party. This is a major question of legitimacy and freedom for a Speaker to act independently during critical decision making.

This practice is no longer relevant as the functioning of the Malaysian parliament after May 9, 2018 opened up a positive sheet in the effort to reform parliamentary institutions as an effective body of check and balance. In fact, even if a Speaker is not from a ruling party, it does not violate the federal law and the constitution.

Reflections from the UK parliament

On April 17, 2019, John Bercow, Speaker of the House of Commons of the United Kingdom (UK) received pressure from a Conservative backbencher MPs to oust him after he issued a separate statement on government policy on Brexit.

On 31st October 2019, John Bercow decided to resign because of mounting pressure from the Conservative government. During his ten years tenure as a speaker, Bercow has succeeded in transforming parliamentary functions in the modern political era and strengthening the role of backbancher MP. However, a firm speaker like Bercow often poses a threat to an unstable government that wants to dominate the parliament.

On November 4, 2019, the House of Commons appointed Sir Lindsay Hoyle as the new Parliament Speaker, after a similar period as a deputy. He won by 325 votes in the fourth round of the vote to defeat six other candidates.

Government-Opposition representation as a “new normal” in Dewan Rakyat

The best thing for the Malaysian parliament to do so far is to retain Mohamad Ariff as Speaker and his deputies. It is unreasonable that the PN government is trying to change the Speaker as Mohamad Ariff has shown independence, tenacity and maturity in carrying out his work as Speaker of Dewan Rakyat.

This should be the “new normal” in Malaysia parliament, when the executive body respects and recognises the contribution from the opposition, and this case, recognising the role of the Speaker and the deputies although they represent different political parties. These Speakers have performed their role admirably and have democratically addressed parliamentary proceedings in the past without any ventured political interest to ensure a smooth parliament sitting in every session.

I expect that the government’s motion to replace the Speaker will be the agenda on the first day of parliament on July 13, or once the debate on the Royal Address of the Yang di-Pertuan Agong ends on Monday August 10, which is the fifth week of the Dewan Rakyat sitting.

In any case, the attempt to change Speaker of Dewan Rakyat by the PN government does not seem to be in line with the current priorities of a country that needs the parliament to address challenges of the Covid-19. It will also put the government at risk in the direction and goals of parliament that should focus on debating economic recovery issues for the well-being of the rakyat.

Should Mohamad Ariff be retained as a Speaker of Dewan Rakyat, then the Malaysian parliament would be taking a positive step towards a mature parliamentary democracy. If not, it would create an ineffective precedent for the country’s parliamentary democracy system for the future. I hope every MPs will act by looking at the achievements of Mohamad Ariff as a credible Speaker in leading parliament towards mature democracy beyond political party differences.