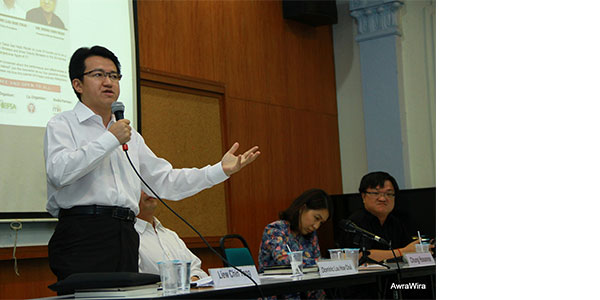 In the contest of ideas, the opposition has a major role to play by setting the agenda for the government to “steal”. But we must not stop there. We must push harder and constantly come up with new and better ideas, guided by the broad philosophical framework that we champion.

Since July 2005 when the then UMNO youth chief Hishammuddin Hussein first waved the keris which coincided with UMNO’s turning to the right-wing for ideas, the opposition in general has benefited from a very long “honeymoon” with the non-Malay voters. The massive decline of ethnic Chinese support at the Teluk Intan by-election is probably the end of the nine-year anti-UMNO fervour.

The “we are not UMNO” platform can only get us so far. When the anti-UMNO fervent recedes, the opposition will have to win by providing better ideas nation­ally and governing with better ideas at the state level.

Many among the opposition ranks hold the view that we shouldn’t teach Bari­san Nasional to be smarter. Hence there is no need to work on any policy ideas. I beg to differ.

The opposition in Malaysia has virtually no opportunity to participate in the formulation of policies -not that BN reps have any such opportunity. Previously, senior civil servants play a major role in crafting policies.

Increasingly, the government outsources its thinking duties to the private sec­tor. It is the vendors, the contractors and the rent-seekers that tell the govern­ment what to do. Defense “toys” are purchased by the government, against the advice of the Armed Forces. Cities are built on the advice of developers. Highways are constructed because the concessionaires say we need it. MRT lines and wa­ter transfer tunnels are being built just because a big-time crony has now got the tunneling machine tools and technical capabilities after building a huge flood mitigation tunnel which doesn’t prevent floods.

Occasionally, the government outsources thinking to the NGOs, which are sup­posed to be the conscience of the society but may champion a single cause at the expense of the overall wellbeing of society.

The first task for the Malaysian opposition is to reclaim the public policy space from private profiteers as much as from Barisan Nasional.

As much as we need to battle UMNO and its outsourced extremist groups like ISMA and Perkasa on iden­tity politics (race, religion and royalty), we need also to steer the public dis­course to the questions of democrati­sation (think about the BERSIH cam­paigns) and economic justice (think about our anti-corruption platform and the anti-GST campaign).

And, perhaps it is also in those areas where Barisan Nasional can copy our policies at the superficial level but never the spirit behind it.

Take BR1M for example. In 2011, the Pakatan Rakyat Policy Committee met on a weekly basis between July and September to formulate an alternative bud­get. That was after tremendous effort being put into crafting a Common Policy Framework in December 2009.

We announced in July 2011 that the Pakatan Budget would focus on uplifting the lives of bottom 60 percent ordinary Malaysians. We stressed on the impor­tance of removing monopolies and corruption, as well as rent-seeking activities that add to the cost of living of the bottom 60 percent and eat into their dispos­able income.

We also argued that the government must provide much better public health­care, public transport and public housing to reduce the need to depend on private providers in these areas to free up disposable income of the bottom 60 percent.

We also argued that setting a minimum wage, reducing the influx of unskilled foreign labour and a massive drive to help SMEs upgrade technologically are the ways to go to create a virtuous cycle of an economy that provides decent income jobs, more skilled-based, and with higher productivity.

Immediately after our announcement, Deputy Prime Minister Muhyiddin Yas­sin said the BN government would match Pakatan Rakyat on improving the lives of the bottom 60 percent. The next day, a friend in the government then told me that his team was tasked to come up with ideas without changing the crony-in­fested economic framework. The product was BR1M.

The case of the 20 percent royalty for oil-producing states is similar. The oppo­sition championed the cause and eventually it is something that everyone talks about. One fine day, someone in the government wants to be relevant and popu­lar with the public would say, let’s do it or at least let’s pay lip service to it.

Very soon, I can foresee that, not to be outdone by Sarawak’s new chief min­ister Adenan Satem, the Sabah BN government would likely to adopt the agenda of disbanding the cabotage policy.

So we in the opposition must not stop short at the first generation issues. We need a second generation policies that delve deeper into the real fundamentals of the economy, rather than the superficial parts of it. We need more policy ideas and no less.

This shows that while sitting in the opposition bench, there is always ways to set the bar for the government to jump and we must constantly do so with the hope of improving the daily lives of ordinary Malaysians, even when we are not in government.

And, to set agenda is important. If we fail to set our agenda and let it dom­inate the public discourse, UMNO, its outsourced bigots in NGOs and its gov­ernment-funded propagandists like BTN, will make race, religion and royalty the dominant issues while the cronies rob the nation without anyone watching.

Ultimately, we want to hit at the heart of UMNO-BN’s crony-capitalism to show all Malaysians that a different development trajectory is possible. We can crack the crony system if we hit its core deep.

There are real development alternatives that work, and we represent those al­ternatives that would bring forth a nation that is fairer to ordinary Malaysians yet more dynamic economically, and at the same time, sustainable for the long haul.