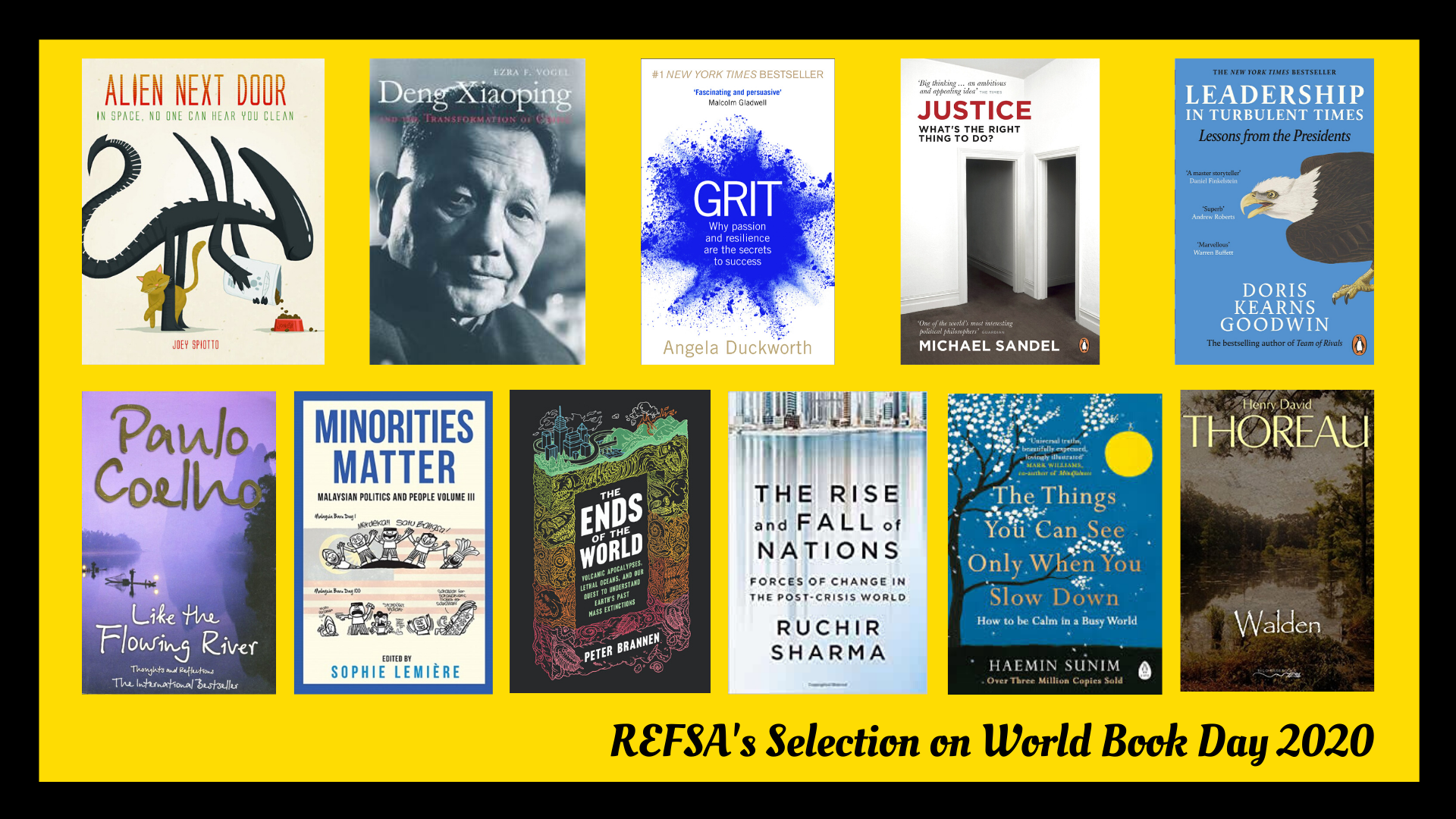 Bored by the Movement Control Order? Wondering what to read next? This World Book Day, our team at REFSA shared the books they have been reading during the MCO, and what keeps them inspired in unusual times like this.

“In times of uncertainty such as this, I find solace in reading the biographies of great leaders of the past. I picked up Leadership: Lessons from the Presidents for Turbulent Times, which tells the stories of how four US presidents – Lincoln, Ted Roosevelt, Franklin D. Roosevelt and Lyndon Johnson – rose to the occasion and led Americans through crises. I also started reading Deng Xiao Ping and the Transformation of China, which documented the life of Deng, who, after great hardships in his younger days, became a great leader who made Modern China. I thought it apt to mix East with West!”  – Ivy Kwek, Research Director

“Reading The Things You Can See Only When You Slow Down for the third time has never been more enjoyable during this crisis. This is no doubt one of the most heart-warming books that motivates me in difficult times. It provides tips for me to not dwell in negative thoughts and to change my perspective to survive in any stressful situation. Sitting on a sofa after yoga and taking some time to read these thoughtful words honestly made my day.” – Miaoling Ng, Intern

“A book I recently read that struck me as very relevant in these times, Grit – The Power of Passion and Perseverance continues to give me a new perspective on how to deal with uncertainties and challenges thrown unexpectedly our way. In the author’s words, grit combines courage, resilience, ambition and more importantly, self-control in the pursuit of goals that takes months, years or even decades, with no particular concern for rewards or recognition along the way. It is harder said than done, but I do think we, individually and collectively as a society, can achieve bigger and greater things if we build grittiness into our mentality and persist through difficult times.” – Tan E Hun, Executive Director

“I’m going to be honest. I haven’t been reading a book during the MCO; the only reading I’ve done is of The Economist and piano scores. I grew up playing the piano but, as I’m sure many of you will attest to, finding the time to do so as you get older gets a bit difficult. In this regard the lockdown has been a blessing. But, there is a book I will recommend everyone read: The Ends of the World, by Peter Brannen. In this book Brannen goes on a road trip through the five mass extinction events this planet has experienced in the past 440 million years. It is a vivid, deeply detailed, and engrossing account of history that will leave you convinced that we are walking straight into a sixth mass extinction: after all, all but one of these previous events (the one with the asteroids) had the fingerprints of climate change all over it.” – Darshan Joshi, Lead Researcher

“When I was a child, I was introduced to the bizarre world of sci-fi horror via Ridley Scott’s Alien and James Cameron’s Aliens. The titular Alien creature was the stuff of many nightmares well into my childhood. As an adult, the creature no longer frightens me, but rather has become an interesting piece of biological fiction. Joey Spiotto’s Alien Next Door is a child-friendly cartoon book rendition of the space beast, showing it peacefully coexisting with the film series’ protagonists and participating in various shenanigans. It is a symbol of how I’ve grown past the fear of a fictional monster as a child, and a reminder that any kind of fear can be overcome with time.” – Nik Mohamed Rashid Nik Zurin, Researcher

“During this time when we’re all cooped up inside and constantly bombarded with stressful news and rumours, I picked up Walden by Henry David Thoreau, an account of the author’s stay in a small cabin next to a pond in Massachusetts. Thoreau espouses the ideas of simple living and self-sufficiency, for example building his cabin himself, and by recounting his experience reminds us that we don’t need as much as we think, and that life can indeed be simple. It serves as a good rejoinder to our current frazzled state, both as individuals and as a society.” – Frederik Paulus, Advisor

“The collapse of the Pakatan Harapan government has led me to this book, Minorities Matter: Malaysian Politics and People Volume III, edited by Sophie Lemiere, which provides a possible clue on the demise of the twenty-one months old government. The book is a compilation of ten separate articles that highlights the deep structural problem in Malaysia; the nature of its political culture, where race and religious rhetoric plays a too-dominant part, and where political patronage is key to maintaining power, remains. Minorities Matter makes me wonder about the (im-)possibility of reshaping this political culture.” – Cheng Kidd, Intern

“Like most people out there, I went into the MCO with the optimistic notion that I’ll be able to finish tonnes of books during these days of restricted movement. Being the professional procrastinator that I am, it’s day 37 now and I still haven’t finished a single one. Instead, I picked up a book that I had neglected for a while and resumed where I had left off. The book is called Like the Flowing River by best-selling Brazilian scribe Paulo Coelho who is well known for his novel ‘The Alchemist’. Unlike his novels, this book is a collection of his personal reflections – no plot, no chapters, and no coherence from one to the other. If we think carefully, isn’t this an accurate representation of our lives? We often describe our life as a story or a journey with structured plotlines and hurdles to overcome to reach our goals. But in reality it’s only a collection of disjointed moments that we try to make sense through our internal narration. And when this narrative clashes with our expectations, we tend to get upset. Reading this now serves as a great reminder to not be overly consumed with reaching a ‘destination’ till we forget to savour the sweet small moments.” – Iskandar Fareez, Communications Director

“I am reading The Rise and Fall of Nations: Forces of Change in the Post-Crisis World by Ruchir Sharma. Sharma’s prediction of the global economy after the 2008 Financial Crisis was clear and progressive. The rise and fall of a nation depends on government leadership handling the post-crisis situation. Most of the new leaderships that came to power after the crisis tend to enhance political and economic reform, as the people demand new leaders to provide a breath of fresh air and see the reform idea as necessary for the country to emerge stronger. Unfortunately, those leaders often only embrace the reform idea in the first term and became more autocratic in the second term as power play set in. Ruchir Sharma gave readers 10 points on how every leader can play a part in making the global economy stronger and fair in future. It is a vital guide for the new global economic order. – Fakhrurrazi Rashid, Research Coordinator

Michael Sandel’s Justice: What’s the Right Thing to Do? is apt to be read and re-read particularly in this turbulent time of both health and economic crisis, when every single policy decision involves a moral dilemma. Anti-lockdown protests in the US are irrational and ridiculous indeed, but such right-wing movement is bringing back in focus the ideological debate of big government versus small government. To what extent should the government implement the suppression strategy to flatten the transmission curve? To what extent should the government interfere with the economy amidst the pandemic? Should the allocation of public expenditure focus more on safeguarding vulnerable groups, or prioritize the survival of the middle class to help the economy bounce back? COVID-19 does not discriminate between poor or rich and no one can really know for sure how our socio-economic structure is going to change after the crisis. It is time for us to pull down the veil of ignorance, and rethink a social contract for better distributive justice in a post-COVID-19 society. – Raymond Kwan, Researcher