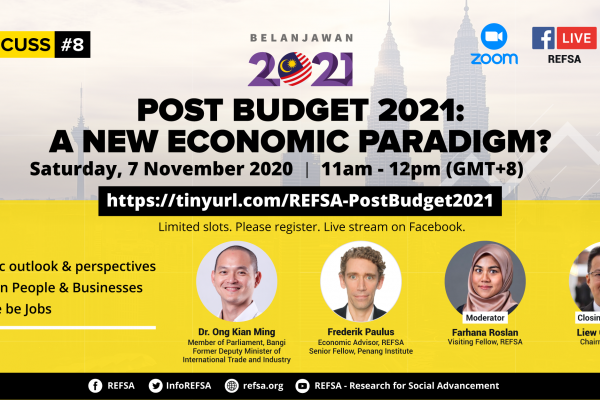 Rarely will a budget prove so consequential to the future of the economy as Budget 2021, even in a calendar year that effectively already saw three budget cycles. Although the economic conditions are dire, they also afford a unique opportunity, in the form of additional fiscal space, to support jobs and income in the short term, and to kickstart the transition to a greener, more sustainable and more equitable economy in the longer term.

Dr. Ong began by laying out three main points for Budget 2021. Firstly, Budget 2021 lacks a coherent strategy and fresh ideas to battle COVID-19, to protect the vulnerable and to create jobs in new areas.

Secondly, even though Budget 2021 is said to be historic, with the highest overall amount at RM322 billion and an increase in development expenditure from 50 billion ringgit in 2020 to RM 69 billion in 2021, further transparency and greater insight into where this new expenditure will be deployed is very much needed.

This is because not all of this money may have a good multiplier effect on the country’s economy, and may also not be very effective in helping the vulnerable groups. For instance, giving cash grants to the B40 community will likely have a higher multiplier effect in the shortest period of time, because this segment will need the money and spend it in the economy straight away, whether to buy daily necessities, food, or transportation.

Thirdly, even though there have been some enhancements of social welfare programs and cash transfer, the overall amount is still severely lacking.

Frederik said that Budget 2021 has a number of initiatives that are going in the right direction. However, the amounts budgeted seem insufficient to have a real impact.

According to Bank Negara Malaysia (BNM) earlier this year, GDP growth for 2020 is forecast to be between negative 3.5% to negative 5.5%. The budget assumes pretty much exactly the middle of that range which is negative 4.5%. However, when compared to the projected GDP growth for 2021, BNM announced that it would be between 5.5% to 7.5%.

The budget, on the other hand, assumes 6.5% to 7.5%, in other words the higher end of the BNM range. It’s important to note that there is significant uncertainty around these numbers, especially given the last few weeks where we saw a resurgence of COVID-19 cases along with targeted lockdowns in several places.

It is quite certain that these lockdowns will affect GDP, which contributes to the question on how the country can actually reach the level of growth in 2021. More importantly, the situation is still fluid as a lot of things will depend on the COVID-19 vaccine.

On top of that, the path to fiscal consolidation, which aims to reduce the country’s deficit, is quite steep. Budget 2021 projection has shown a substantial decrease in the deficit. And then in two years time, we’re looking practically to return to a pre-crisis level.

This is quite aggressive, and it leads to concern that the economic recovery may be hampered by excessive tightening of government spending. This does not imply that the government should throw caution to the wind and borrow freely. But as REFSA’s Brief pointed out, the yield one Malaysian Government Securities is currently among the lowest ever seen. Thus, if there is a time to borrow, it would be now.

Dr. Ong further reiterated that Budget 2021 is premised on the wrong assumption that our economy will bounce back immediately and strongly in 2021. He made three key points on why a strong economic recovery may not take place in 2021. Firstly, the third COVID-19 wave in Malaysia shows that we remain vulnerable to COVID-19 shocks even in 2021. Secondly, new COVID-19 waves in the United States and Europe with higher infection rates paints a very fragile picture for the global economy in 2021.. Thirdly, the deployment of vaccines is not likely until the middle of 2021, and mass immunisation across the country might take time..

Frederik highlighted that the increase in cash grants – Bantuan Prihatin Rakyat (BPR) is commendable, but overall still modest. But the possibility of withdrawal from EPF Account 1 shows that the people’s disposable income is under threat. The government must safeguard it as borrowing money from the future may have adverse consequences.

Dr. Ong pointed out that although there is an increase in BPR and other social welfare programs, there aren’t efforts made to extend the social protection to a greater number of people, particularly the vulnerable groups. The assumption made was that the increase of registrants under the E-Kasih (database maintained by Jabatan Kebajikan Masyarakat) might cause the government to fork out a bigger allocation for the program. Similarly, the extension of the Employment Insurance System (EIS) is commendable, but it fails to cover a wider group of vulnerable people, particularly workers in the informal sector.

Furthermore, the wage subsidy program announced in Budget 2021 will only help SMEs to a certain extent. SMEs felt that the subsidy is insufficient because most SMEs are located in the Klang Valley, where CMCO is currently in effect. And they would have drawn their cash reserve by the first half of the year, especially during the Movement Control Order (MCO). Therefore, SMEs are not expected to bounce back next year. It is suggested that a targeted wage subsidy program be introduced to SMEs and businesses at areas designated as CMCO. The subsidy can go up to RM1,000 or RM1,200. In other words, it is important to increase the COVID-19 allocation, so SMEs and businesses do not need to retrench their workers now.

Frederik expressed concerns that the pandemic outbreak has led increasing amounts of people in the workforce to join the informal sector. This shift could threaten the welfare of those workers, as there is less regulation. More importantly, most of them are probably also earning significantly less as compared to their previous work. The Department of Statistics Malaysia is not able to capture these data on the informal sector. Thus, the government should incentivize the registration under the EIS and extend the insurance coverage to the informal sector. Stronger social safety net aside, this could provide a good tabulation of who is in the sector and also an avenue to provide additional support.