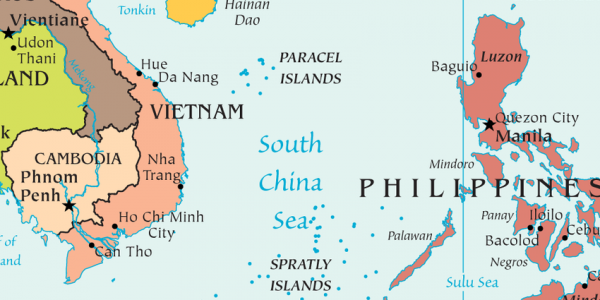 by ivy kwek and chew-ping hoo

Hydrocarbon exploration by Malaysia’s Petronas recently triggered a three-way standoff in the South China Sea that lasted nearly six months. It only ended in mid-May upon the departure of the West Capella, the drillship at the heart of the matter. Tensions peaked in April with the deployment of a Chinese survey ship to Malaysia’s exclusive economic zone and a marked increase in U.S. naval operations in the area. Throughout the ordeal, Malaysia stuck with its traditional cautious approach, deploying its own navy and law enforcement and reiterating its support for freedom of navigation while simultaneously warning against the risk of miscalculation from increased numbers of warships and other vessels in disputed areas.

There has been debate within the Malaysian academic and think tank community over the country’s response and its approach to the South China Sea more broadly, with some advocating a more conciliatory stance toward China in the interest of closer bilateral relations and others advancing a nationalist “enough is enough” argument that calls for deeper cooperation with the United States in order to stand up against China’s aggression. The majority of voices, however, continue to support a cautious approach, wary of making an irreversible strategic misstep.

There are, indeed, significant reasons behind Malaysia’s pursuit of a quieter middle path that cannot be ignored. But a balanced approach need not be a passive one. Instead, Malaysia needs to redouble its efforts at engagement on all sides and work with China, its Southeast Asian neighbors, as well as the United States and its allies to safeguard its maritime interests.

There are several key arguments for Malaysia maintaining its low profile in the South China Sea.

Malaysia has always preferred to use backchannel diplomacy to resolve conflicts. Notwithstanding the recent standoff, Malaysia continues to enjoy a cautiously friendly relationship with China, unlike the open spats between China and other Southeast Asian claimant nations. An understanding that Malaysian leaders will not be overwhelmingly partial toward the West is also key in gaining the trust of Chinese leaders.

Given the uncertainty in U.S.-China relations after Covid-19, Southeast Asian countries including Malaysia are reluctant to make any decisions that could result in them being caught between the two giants. An increasingly antagonistic relationship between China and the United States will only hinder cooperation in the region and worsen the situation in the South China Sea, as every action is seen as a provocation.

And the current political situation in Malaysia is not conducive to any international confrontations nor any emphasis on foreign policy. The new Perikatan Nasional government is aware that it is sorely lacking in political legitimacy, given that it came into power through a political coup. The instability within the new coalition means that the government will be reluctant to open up another front on the South China Sea issue, which could risk backfiring if mismanaged.

To protect one’s sovereign rights and national interests on one hand, and to manage tensions and maintain regional stability on the other, is a difficult balancing act. There are, however, some steps that can and must be taken.

First, Malaysia must initiate fervent diplomatic exchanges with China. Malaysia should leverage its friendly ties with China to seek an amicable resolution without compromising its own national interests. China should be made to understand that its assertive actions in the South China Sea do not serve its interests. Its recent Covid-19 medical assistance diplomacy has borne fruit, with the aid being well appreciated by the Malaysian government and society at large. The recent maritime episode however, has soured both bilateral relations and China’s image among the Malaysian public. If this  becomes the “new normal” of Chinese activity in Malaysian waters, it would inevitably undermine Malaysia’s conciliatory approach and push public opinion closer to the United States and the West.

Third, Malaysia needs to strengthen its maritime capabilities and build more credible partnerships in the region. This is in line with the inaugural Defence White Paper, which has defined Malaysia as a “maritime nation with continental root.” With an expansive coastline of over 2,900 miles and a vast exclusive economic zone to protect, the Royal Malaysian Navy is in dire need of modernization in order to sufficiently carry out its missions. A joint capability development plan that incorporates smart procurements, technical support, and personnel training with credible partners should be pursued, in order to enhance not only the navy’s capabilities but also those of the other services in the maritime domain. Maritime domain awareness needs to be emphasized at the top policymaking level to ensure close coordination between the Prime Minister’s Office, Ministry of Finance, Ministry of Defence, and other relevant ministries in providing the sustainable defense funding necessary to safeguard the nation’s maritime security interests.

Finally, the United States and its allies can do their part by better strategizing their approaches toward Southeast Asian countries. This can start by reengaging with ASEAN-led mechanisms, which have been repeatedly undermined by President Donald Trump and Secretary of State Mike Pompeo. It is important for outreach to the region to remain consistent, and for messaging to focus on openness and inclusivity rather than merely pushing the narrative war against China. The United States and its allies’ capacity-building in the region has come a long way and will not be dismissed or ignored easily. A closer, more credible partnership must be forged.

As Ian Storey and Malcom Cook recently observed, “Nothing has fundamentally changed in the South China Sea: China continues to assert its claims, America responds with more FONOPs, and the Southeast Asian claimants look on with concern and a degree of fatalism.”

Indeed, Malaysia has to navigate cautiously under China’s watchful eyes, while managing expectations from the United States and its allies. The situation is not a pleasant one. China’s continued assertiveness is a signal that it will not back down and will not tolerate any new oil exploration activities by the other claimant states. The latest episode is no different than before the Covid-19 situation. China has continued the same pattern—and so has Malaysia.

To better enable Southeast Asia to stand up to aggression in the South China Sea, the United States and its allies must, counterintuitively, learn to first diffuse tensions with China at the global level, so as not to make small states in Southeast Asia feel trapped in a new Cold War. They must do more to help strengthen the capabilities of Southeast Asian maritime forces. An understanding of the tough and delicate balancing act that Malaysia attempts to play should also be appreciated. The United States should forge a low-key but credible partnership with Malaysia, while strengthening ASEAN’s agency within its own Indo-Pacific strategy.

— Published in Asia Maritime Transparency Initiative on 29 May 2020.