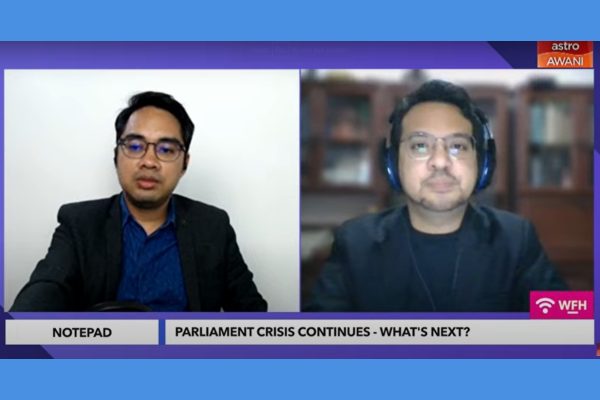 Ibrahim Sani’s Notepad: What’s Next From A Parliamentary Impasse?

Raja Ahmad Iskandar Fareez, Communications Director of REFSA speaks with Ibrahim Sani on what to expect next following the parliamentary impasse arising from today’s protests.

After a week of heated and interrupted parliamentary sittings, the focus now shifts outside the Dewan Rakyat. As entry to the parliament building was sealed off, 107 opposition MPs gathered in solidarity against the indefinite postponement of this session – due to a few positive Covid-19 cases detected in the building. REFSA Communications Director Iskandar Fareez talks to Ibrahim Sani of ‘Ibrahim Sani’s Notepad’ regarding the parliamentary impasse and its implications.

Iskandar noted that many of the events leading up to this week were unprecedented, including the abrupt revocation of Emergency Ordinances last week which bypassed the palace. However, Malaysia did see a repeat of history when state apparatus was used to shut down the main pillar of our democracy. Iskandar pointed out that the Perikatan Nasional government’s authoritarian tactics to stay in power was similar to what we have seen during previous Barisan Nasional administrations.

The closure of parliament coincided with what was supposed to be an explanation by de facto Law Minister Takiyuddin Hassan regarding the Emergency Ordinances. Apart from leaving more questions unanswered, Iskandar also criticised the government’s tendency to ‘shift goalposts’ and avoid accountability.

The interview included a clip from Dr Farhan Rusli, who lambasted the misuse of ‘science and data’ as an excuse to suspend parliament. As many other places with higher positivity rates (than the rate recorded in Parliament last week) remained open, Iskandar said this double-standard approach caused more confusion and instability. The hypocritical move would only weaken public trust in our pandemic management strategy.

Furthermore, last week’s Parliament sitting can be seen as a trial run that would mirror the reopening of our economy and how we manage the pandemic in the long run. Both Ibrahim and Iskandar raised concerns that if we cannot handle a situation involving 1000+ MPs and staff, then how are we to manage with a population of 32 million?

According to Iskandar, the suspension of parliament has denied the opportunity scrutinise our current pandemic management strategy. While this erodes our democracy, it would be a greater injustice to the rakyat who are currently suffering from the pandemic. To conclude, Iskandar reiterated that the government should be more receptive towards criticism and other perspectives to improve our pandemic management, especially when so many lives are at stake.