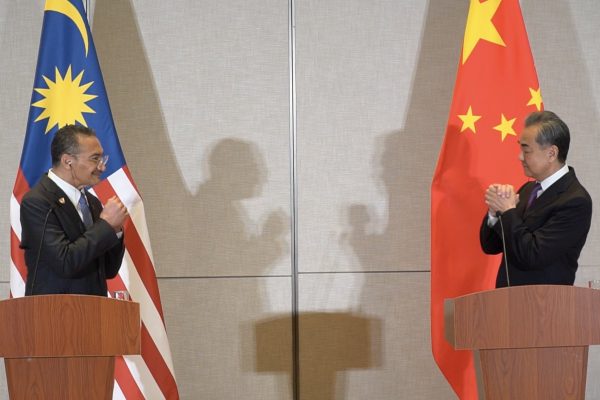 “Trio say the inappropriate remark made to China’s foreign minister sends problematic signals to other nations about Malaysia’s diplomatic alignment.”

A group of academics have demanded Foreign Minister Datuk Seri Hishammuddin Hussein to explain his statement that China will always be Malaysia’s “elder brother”.

They said that the foreign minister’s assertion, made during a joint press conference with his China counterpart Wang Yi, is sending a huge signal about Malaysia’s diplomatic ties to other superpowers.

“If China is considered to be an ‘elder brother’, then it gives a big signal about our diplomatic ties to other superpowers and other countries in the region from a diplomatic relations’ perspective,” they said.

“It will also raise questions towards Malaysia’s foreign policies with other countries such as Saudi Arabia and the United States of America.

“The use of such terms is inappropriate in steering Malaysia’s foreign policy. Our non-alignment stance and role as a middle power must be consistent in prioritising the nation’s interest,” said the trio.

Hishammuddin had made the statement during a joint press conference with Wang Yi following their meeting in Fujian, China on Thursday (April 1).

According to a report by Nikkei Asia, Hishammuddin had spoken on the phone with US secretary of state Antony Blinken before his visit to China – a call he described as “great”.

Ariff, Muziru, and Fakhrurrazi urged Wisma Putra to explain to Malaysians the phrase “elder brother”, which can be construed that China is watching over and protecting Malaysia, while Malaysia is caving in and bowing to China.

They pointed out that both nations have disagreements over issues of sovereignty.

Ruled by the Chinese Communist Party, the eastern giant has been bullying Asean nations over freedom of movement and sovereignty of the South China Sea, unilaterally declaring a so-called “nine-dash line” limit through its military might.

It has also reclaimed islands where it houses its navy and air force and claimed territorial waters on parts of the sea that do not belong to it.

The United Nations Convention on the Law of the Sea (UNCLOS) tribunal on July 12, 2016 had decided that China’s claim of historic rights over the maritime areas (as opposed to land territories and territorial waters) inside the “nine-dash line” has no lawful effect if it exceeds what is entitled to under the UNCLOS.

However, China has blatantly ignored this decision and continued to force their presence through naval vessels. There have also been reports that Chinese military vessels have allegedly been threatening fishermen of Asean countries from operating in territorial waters that rightfully belong to them.

“Public diplomacy must be interpreted based on a consistent foreign policy akin to what was done in the previous administration, and must involve multiple relevant stakeholders such as academics, international relations experts and NGOs,” the three academics said.

Responding to criticisms on the matter, Hishammuddin claimed on Twitter late this afternoon that he was not referring to the two countries’ bilateral relations in making the remark.

“Respecting that Wang Yi is older, and a more senior Foreign Minister; hence ‘elder brother’ to me personally. Being respectful does not signify weakness,” he said.

“Rest assured that Malaysia remains independent, principled and pragmatic in terms of our foreign policy – founded on the values of peace, humanity, justice, and equality. We will continue to contribute meaningfully towards a just and equitable community of nations.”