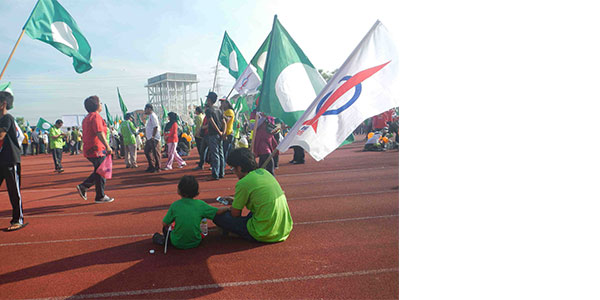 On Sunday, May 5, Malaysians go to the polls. For the first time in our history, in the 56 years since Merdeka, we have a real choice in choosing who to grant the privilege of governing us. Which coalition will you choose? The incumbent Barisan Nasional (BN), which is the only federal government that all of us have known so far? Or the young upstart Pakatan Rakyat?

We at REFSA have made our choice. We choose transformation. We choose Pakatan Rakyat.

Pakatan has transformed race relations. Malaysians of all races gather congenially under the PAS moon and DAP rocket. A Malaysian-Chinese flying the PAS flag, or a Malay waving the DAP rocket symbol, would have been an unimaginable sight as recently as Feb 2008. Pakatan leaders have transformed the prisms by which we view each other, and led Malaysians from narrow communal siloes to broader, harmonious relations.

Pakatan has transformed state governments. The federal Auditor-General has given Penang top marks for being the best financially-managed state; and the RM1.2b cash savings in Selangor are the highest in 28 years. Pakatan state governments were the first to give direct welfare aid to Malaysians: for example, the Senior Citizen Appreciation Programme in Penang and the TAWAS programme in Selangor. Pakatan has demonstrated that it is possible to be financially responsible and populist at the same time.

Pakatan has proven that it can transform Malaysia for the better, in contrast to the ‘transformation’ that (caretaker) prime minister Najib uses as a smoke-screen to hide business-as-usual shenanigans. Even BN supporters seem to tacitly agree. “What is the alternative?” is their common response when asked why they support the dacing. They do not extol the virtues of Najib or of the BN. Instead, they imply the alternative is worse[i].

Indeed, a key thrust of the BN election campaign is fear mongering and cultivating mistrust and divisiveness. Malays are warned that the DAP will install a Chinese-Christian prime minister[ii] who will threaten their interests; the Chinese are presented with the spectre of PAS-instigated hudud law[iii] and everyone is cautioned that “Najib sees dire consequences for markets if Pakatan wins[iv]”.

The mainstream media BN propaganda machine conveniently disregards the contradiction and inherent implausibility of a Chinese-Christian prime minister making Christianity the official religion and imposing hudud law. That such double falsehoods have traction with Malaysians is testimony to the triumph of successive BN federal governments in cultivating mistrust among us and crippling our education system. Did you know: 15% of our schools do not have access to something as basic as clean water?[v]

It is depressing to find the incumbent government so insipid and insecure that it must resort to oxymoronic negativities in its election campaign. Perhaps Pakatan is so strong that the old men[vi] at BN cannot find real, solid, reasonable themes to support their case.
True, Pakatan chief Anwar Ibrahim has issues. But unlike Najib, who is “BN”s best hope”[vii], Pakatan has a depth and breadth of talent. Experienced stalwarts like Tok Guru Nik Aziz and Lim Kit Siang have inspired a profusion of younger leaders who are set to take Malaysia forward. Just to name a few: Lim Guan Eng, Mat Sabu, Tony Pua, Husam Musa, Dr Dzul, Teresa Kok, Salahuddin Ayub, Nurul Izzah, Liew Chin Tong, Hannah Yeoh, Fuziah Salleh and Rafizi Ramli.

True, there is infighting within Pakatan, but that can also be interpreted as a vigorous exchange among equals. Unlike domineering UMNO[viii], Pakatan is a genuine coalition of 3 equal parties, each with their own strong personalities, and the venting of different views is vital for political revitalisation[ix]. So there will be arguments and there will be squabbles before a consensus is reached – just like in any family.

True, there are party hoppers and frogs, but these are the exception, not the norm. Extremists such as Hassan Ali, Ibrahim Ali and Zulkifli Nordin were expelled (and found homes within the BN). Top Pakatan leaders are selfless and willing to sacrifice their political careers for their parties. Consider PAS vice-presidents Husam Musa and Salahudin Ayob, who have left their safe, comfortable home seats to pursue the Pakatan cause in the BN strongholds of Putrajaya and Pulai, Johor, where UMNO was born.

REFSA chooses Pakatan for transformation, harmony, prosperity and stability in action. We reject the deceptive rhetoric proffered by the BN and disseminated by its formidable propaganda machine. To those who prize ‘neutrality’, we say being neutral is also making a choice, albeit passively.

If you are neutral in situations of injustice, you have chosen the side of the oppressor. If an elephant has its foot on the tail of a mouse and you say that you are neutral, the mouse will not appreciate your neutrality – Desmond Tutu[x]

Having made our choice, in the coming days, we shall be publishing infographics and other material illustrating and explaining our position. As always, we shall work on relevant facts and sparkling analysis, and as always, we welcome constructive discourse. No lies for us – we are confident the truth will prevail.

[i] Please see our REFSA Says: Why do you support (caretaker) PM Najib? published yesterday. Available at www.refsa.org.

[iv] As was the headline of a report by Malaysiakini on 17 Apr 2013 based on work by Barry Porter and Gan Yen Kuan of Bloomberg. Available at www.malaysiakini.com/news/227117

[v] Exhibit 6-11, National Education Blueprint 2013 to 2025. Besides that shocking statistic, 20% of schools have inadequate science labs and 27% have inadequate computer labs.

[vii] Please see our infographic Tale of the Tape #1: Najib vs Anwar for more.

[viii] Peninsular UMNO controls 81% of all federal government spending, belying the claim that BN is a coalition. Details in Domineering UMNO and the trivial role of other BN parties. Galvin Wong, REFSA, 27 Apr 2012. Available at www.refsa.org.