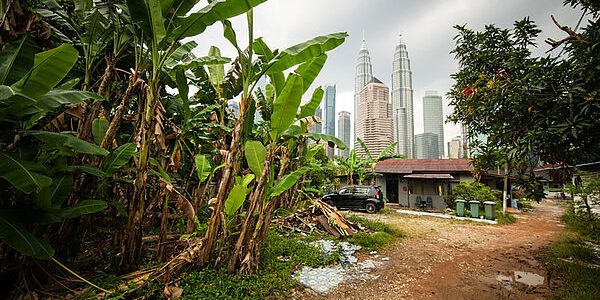 For low-income Malaysia, a lifeline amidst a crisis?

Glancing through official statistics, it would seem as though Malaysians are doing increasingly well. Median incomes almost quadrupled between 1995 and 2016. The country’s Gini coefficient has fallen by over 8% in the past two decades. Poverty has been largely eliminated. If this were truly reflective of pre-Covid reality, the recovery from the crisis might not be so steep.

But a walk through many areas of Kuala Lumpur will get you questioning these purported truths. Poverty and destitution is abundant, sometimes mere minutes away from incredible luxury. Professor Philip Alston, the United Nations Special Rapporteur on extreme poverty and human rights, did precisely this on his visit to the country in August 2019. Amongst his conclusions were that “there has been a significant underinvestment in poverty reduction, a widespread misunderstanding of who is poor, neglect of the poor in many official plans and programs, and an inadequate social safety net.”

Academic studies routinely cast doubt on official statistics too. For instance, research conducted by Khazanah Research Institute, a government-linked outfit, found that the gap between the top and bottom of Malaysia’s income distribution more than doubled during the period median wages were quadrupling. The World Bank finds that increasing numbers of Malaysians earn incomes that are insufficient to meet the cost of living, and highlights four factors contributing to this, especially in urban areas: inflation, low income and income growth, low savings rates, and an acute shortage of affordable housing.

To assuage these concerns, since 2012 Malaysia has utilised a system of direct financial assistance currently known as Bantuan Sara Hidup (BSH), which provides RM1,000 (plus a top-up of RM120 per child) to the lowest-income households (who earn no more than RM2,000 per month) on an annual basis, but it does so in a geographically-uniform manner. This means that low-income households in the most expensive areas of the country receive the same payments as households residing in the most inexpensive – despite the cost of living in the latter being significantly lower than in the former. The cost of basic goods and services in Kuala Lumpur, for instance, is 67% higher than in rural Kelantan, the least expensive region of the country; property prices, meanwhile, are more than four times higher.

Given this, and the increasing presence of economic hardship in Malaysia’s urban areas, it is likely that existing levels of aid are insufficient to act as the sort of robust social safety net that will be required to enhance the economic security of low-income households across the country – something that is likely to worsen in the near future as income and job losses mount as a result of the coronavirus lockdown measures.

But help might be on the way. For all the mayhem the Covid-19 crisis has caused, it has also shed light on the importance of strong systems of social protection. The political palatability of a generous and targeted basic income scheme may never be higher, not just in Malaysia but across the world. Malaysia’s crisis of low wages might take years to solve through painful but necessary labour market reforms, but in the interim it would be prudent for the government to significantly ramp up its social safety net.

A system of monthly payments that varies in quantity by location would be much better placed to address the plight of low-income Malaysians than the existing BSH framework. With unemployment projected to rise to levels not seen for decades as a result of Covid-19, such a policy is urgently required to sustain households in the short-term and prevent the economic crisis from totally compromising their welfare.

Back-of-the-envelope calculations indicate that should the existing BSH policy be turned into a monthly basic income provision, this would cost the government no more than RM48bn annually, a figure just over twice Malaysia’s existing spend on welfare policies and subsidies. Rolling back existing policies, largely unnecessary in the presence of a basic income, would therefore free up funds which cover almost half of the new policy.

To raise revenue to fund the rest of it, attention should turn to new forms of taxation. To maximise effectiveness and efficacy, these should simultaneously assist in solving other issues the country faces. With only real property gains taxed in Malaysia at present, the first option is a wider-ranging wealth tax that would have the effect of mitigating inequality. Another option is the implementation of a carbon tax. A tax rate of just US$8 per tonne of CO2e, or less than a fifth of estimates of the social cost of carbon, would raise roughly RM8bn in annual revenue, and spur the transition towards a more sustainable economy by forcing polluters to internalise the externality costs of emissions. Taken together, these three policies would have the impact of lessening economic insecurity, emissions, and inequality.

The struggles faced by low-income Malaysia have long been clear. The coronavirus crisis offers a lifeline: it has firmly brought into mainstream thought – and popularity – the benefits of robust systems of social protection. It is up to the policymakers to take advantage of the crisis and take concrete steps toward securing a safer and more inclusive future for all Malaysians.