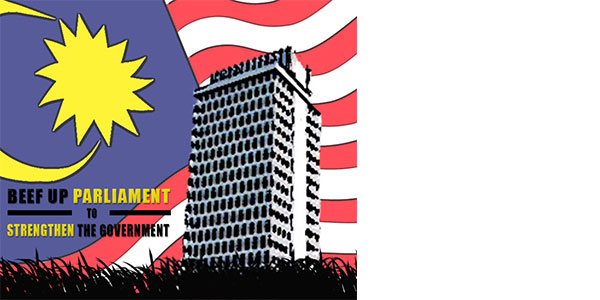 Imagine that you are the owner of a restaurant. Would you ask a waiter to oversee the manager’s performance? No? But that is exactly what is happening with the management of our country!

In our Westminster-style model of democratic government, Parliament is supposed to be the watchman making sure the federal government acts in the best interests of the rakyat. However, less than 60% of Barisan Nasional members of parliament (MPs) are free to perform that role. These MPs also tend to be junior, as their senior colleagues are subsumed into the massive Cabinet mess of 68 ministers and deputies.

It is no surprise, then, that BN ministers escape unscathed from scandals after scandals. Junior BN MPs have, by and large, shrunk back from critiquing their ministerial peers. It is the Pakatan Rakyat federal opposition and civil society that shoulder the burden of check and balance on the government. This makes it easy for ministers to shrug off criticism as ‘opposition-led’ or ‘politically-driven’, much like our under-performing restaurant manager can say ‘It’s just my competitors bellyaching’.

The bad news is that ours is a shred of Westminister-style democracy. The good news is that there are sparkling versions that we can emulate. Just last month, British Prime Minister David Cameron was slammed by MPs of all parties for the “plebgate” controversy, while, in Australia, Labor MPs went so far as to depose their own prime minister Kevin Ruud when they felt his policies were out of touch with public opinion.

The root of these vibrant and effective governments is a slim Cabinet, which leaves many senior MPs free to perform important oversight roles in Parliament rather than butt heads in overlapping ministerial positions within a corpulent Cabinet.

Read Cabinet & Parliamentary Rebalancing (Part 3): A weightier Parliament and a slimmer Cabinet on how a beefed up Parliament with bi-partisan, powerful, and well-resourced committees can help our government avoid stinks.