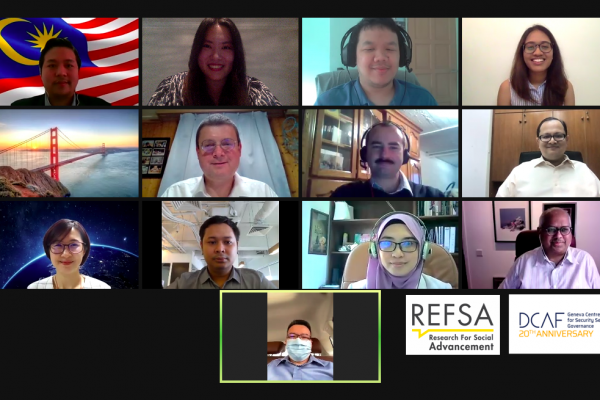 Jointly organised by REFSA and DCAF

In a roundtable consultation on 21 October 2020, co-organised by REFSA and DCAF, participants discussed the way forward for security sector governance in Malaysia, and made some recommendations on reform including having greater inter-agency coordination, transparency and stronger civil-military relations.

The participants agreed that 2020 has been a turbulent year for Malaysia, with the COVID-19 pandemic, political instability and the increasingly complex geopolitical scenarios.

One of the greatest structural challenges pointed out by the participants is lack of a central coordinating agency for security actors in Malaysia. There are many policy documents by different agencies, such as the Defence White Paper, National Security Policy, Security and Public Order Policy and the Malaysia Cybersecurity Strategy to name a few, but there is little coordination between them. To connect the “jigsaws”, the National Security Council ought to play a greater role in providing the strategic direction and streamline the strategic priorities, as well as the allocation of resources.

In that regard, the NSC needs to be strengthened and equipped with experienced personnel and adequate authority to do so. The recent NSC Act amendment to give power to the NSC to compel agencies and private entities to provide intelligence in face of national security threat is a step to the right direction, but there still needs to be a central body to coordinate and synthesise all these intelligence.

Having a stronger NSC is also imperative to help clearly define the role of agencies and avoid overlaps. In Malaysia, this is particularly necessary in cyber and ocean governance which involves multiple agencies. At the operational level, interagency cooperation can also be boosted through constant communication. The “Single Maritime Point of Contact” Policy at the operational level made up of all agencies helped actors to understand the landscape via a calibrated approach.

To that end, the roundtable also proposed a special cabinet committee on security matters to share resources and intelligence. In the spirit of the “Whole-of-Government” approach, the Ministry of Finance as well as the Economic Ministry must also be involved in national security planning.

On the issue of oversight, the participants believe that we need to ensure the independence of Malaysia’s auditing bodies. The Parliamentary Select Committee can play a role in providing oversight, particularly in the procurement of assets that are often prone to corruption and malpractices. A Joint Development Plan that is written based on the needs of the end user i.e. the military is also crucial to ensure the decisions on procurements that can withstand the change of government or political masters.

Sharing of information among agencies must be improved to help policymakers make informed decisions, as pointed out by the Audit-General Report this year (Laporan Ketua Audit Negara – LKAN). In that regard, there is a need to rethink how the Official Secret Act works and a Freedom of Information Act should be considered.

On the welfare of personnel, the upskilling for personnel needs to catch up with the current changes in technology, while their pay schemes must also be revised to account for the future of skilled officers and enlisted personnel. To tackle misconducts of security personnel as well as the cases of mistreatment and abuses, there is a need for an ombudsman system in Malaysia to sufficiently address the grievances of the victims.

Finally, on the issue of strengthening civil-military relations, the participants opined that social media is the new battleground. Accountability and oversight can also be achieved through social media by changing societal apathy and encouraging community leaders to play a role in raising awareness of national security issues. The volunteer reserve force (Wataniah), PALAPES, local police and firemen can be mobilised to do engagement work at the community level. Apart from being the oversight mechanism, the Parliamentary Select Committee can also act as the bridge between the general public and the security personnel and encourage more civil society participation on security matters.

Going forward, the participants agree that more coordination and engagement are needed for good security sector governance principles such as accountability, transparency, rule of law and good governance to take root. Understanding must be fostered among all personnel, government officials, policymakers and general public that security is a collective responsibility of all.