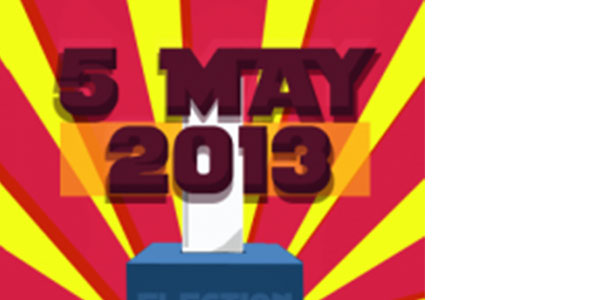 The day of reckoning will be upon us soon. May 5, 2013 is polling day and we get to decide who we want to be governed by the next five years. The date could go down in history as the day the course of Malaysian politics changed. A lot is at stake, and like March 8, 2008, it will be talked about for many years to come, whatever the outcome.

Anything can happen in this general election. Barisan Nasional could tighten its grip on power. It could win a two-thirds majority and recapture the states it lost in the last election. On the other hand, this election could mark its demise. If Pakatan Rakyat wins, it will be the turning point for the country as a new government will be formed after 55 years being ruled by the same party. The political tsunami PR started in 2008 will wash BN totally out of Putrajaya.

As expected the fight for seat allocations is going to heat up in the next few days until nomination day on April 20. Already, signs of dissension can be seen in both BN and PR coalition parties.

Trouble seems to be brewing in Wangsa Maju. Its MCA division claims the constituency is theirs and not Umno’s. The division is unhappy over the rumoured replacement of Datuk Yew Teong Look with Umno’s Datuk Mohd Shafei Abdullah. A threat “to stop campaigning” has been issued if top leaders do not heed their request for Yew to be fielded. PM Dato’ Sri Najib has urgently asked all to “close ranks” for fear of a repeat of the “internal sabotage” that caused the loss of many seats in the last election.

PR has a problem with some state leaders in Kedah who were not nominated to stand for election. They plan to band together as a coalition in order to stand as independent candidates. Another headache is brought about by PKR and PAS who are at loggerheads over who has legitimate claim over the Sungai Acheh state seat. A three-cornered fight is likely if PR is unable to resolve the issue before nomination day.

BN and PR leaders know it is impossible to please everyone, and there are always more contenders than seats. At this time, almost every politician sees himself as the most qualified nominee. Election fever has a way of taking over people’s senses, making it difficult for them to think sensibly.

Some prominent senior ministers are apparently no longer ‘winnable’ and have been dropped from BN’s list of election candidates. Minister in the Prime Minister’s Department Tan Sri Nor Mohamed Yakcop is now out of the picture. Information, Communications and Culture Minister Datuk Seri Rais Yatim and Tourism Minister Datuk Seri Dr Ng Yen Yen have also been shown the door. Also shown no mercy is Kuala Kangsar MP Tan Sri Rafidah Aziz. Datuk Seri Shahrizat, naturally, is not allowed to contest because of the ‘cowgate’ baggage she’s dragging around. It seems like the few women politicians in BN have now become fewer.

Pandan MP Datuk Seri Ong Tee Keat’s candidature seems to be hanging in the balance. Speculation is rife that MCA president Datuk Seri Chua Soi Lek is gunning for him. But Ong, long considered a thorn in Chua’s flesh, has dug in his heels and wants to stay put in Pandan. He seems confident he has the ear of the PM and is not too worried about plans to oust him, despite Chua calling for a central committee emergency meeting to decide the former MCA president’s fate.

Some politicians have stepped down of their own accord. Gerakan president Tan Sri Dr Koh Tsu Koon, Energy, Green Technology and Water Minister Datuk Seri Peter Chin and PKR president Dr Wan Azizah are happy not to contest.

With just about one more week to nomination day, rumours and speculation over election candidates will be taking wing on all media platforms. Last minute changes are not out of the question. Who’s in and who’s out? We will only know for sure come nomination day.

The country is now in the hands of caretaker governments, and there are certain things that they can and cannot do. According to Bersih 2.0 monitoring committee, a caretaker government “should not make decisions with potential financial implications to the next elected government or use its machinery for campaigning purposes”.

On a positive note, the Penang government has returned the keys of its official cars to the state secretary, but not everyone is willing to do the same. In fact Datuk Seri Rais Yatim debunks this view, claiming that government machinery can be utilised as long as campaigning hasn’t started.

Barrage of advertisements from BN

The onslaught of advertisements from BN in the run-up to the general election is threatening to spiral out of control. The prime minister’s office (PMO) has kept up a steady bombardment of advertisments costing millions of ringgit in the hope that it will win votes.

Consumer analysts Nielsen Media Research revealed that the PMO spent a staggering RM67.8 million in March, and this does not include the money that went into billboards and digital advertising. In February the amount was RM36.1 million, according to Maybank Investment Bank, most of which went into television, radio, Umno-linked Media Prima and Astro.

BN’s online campaigns offer all sorts of free goodies, and more and more online space is being taken up by BN parties and government departments, so much so opposition parties are hard pressed to find suitable platforms for advertising and campaigning. Despite all this, the Merdeka Centre survey showed Najib’s popularity dropping 2 % to 61% while similar surveys show approval for BN hovering just above 40%.

We understand spending on advertisements may be necessary but such astronomical amounts are truly a criminal waste of funds. Promotion and advertising may help prop up a politician temporarily, but if his credibility fails to stand up to scrutiny, it is only a matter of time before the structure collapses and buries him.