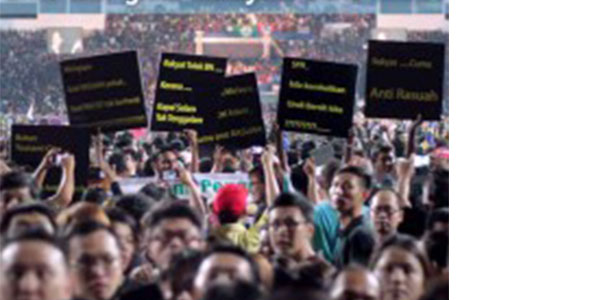 Malaysians, and Najib, singing the blues over BN ‘win’

Prime Minister Dato’ Sri Najib Razak may still have the top job after the election, but he did not win the hearts of the majority of Malaysians. Attracting just 46.8% of the popular vote, a historic low for the BN, the coalition appeared more blue than boisterous when it was proclaimed ‘winner’ of the 13th General Elections.

One rural vote equals six urban votes, and this works out heavily in BN’s favour. The Election Commission’s (EC) malapportionment of electoral boundaries ensures that BN can win Parliament with a miniscule 18.9 percent of the popular vote, which was what happened in the 12th General Election.

Despite this unfair edge, BN was not feeling absolutely confident going into GE13: its win is marred by reports alleging electoral fraud. Sabah was indeed Najib’s “fixed deposit” as the BN has allegedly poured in tons of money in its campaign of money politics, threats and disinformation in this under-developed state. 60,000 dubious voters in Sabah reportedly gave BN its victory, and video and photo evidence of phantom voters and vote-buying have been splashed across social media platforms.

In the peninsular, the suspicious spike of new voters in semi-urban and rural constituencies (as high as 62% in Tapah which was re-captured by BN) has also been highlighted. The EC predictably refutes any alleged fraud, and claimed that the ‘indelible’ ink was so easily removed because it had to comply with halal regulations. We wonder though, why there seems to be no issue with the adhesive strength of such ink in other countries with great numbers of Muslim voters, including Indonesia and Afghanistan.

The poll results are a sobering call – not just for BN, but for Pakatan Rakyat as well. Congratulations are no doubt in order for the Pakatan coalition of PKR, DAP and PAS that won 50.3% of the popular vote and whose support encompassed all races in urban areas. However, this number also reveals that nearly half of Malaysian voters, mostly in the rural areas, remained to be convinced. On this note, Negeri Sembilan DAP chief Anthony Loke recognises the need for PR to work harder to convince the non-urban voters.

PR-friendly urban voters too now realise that no change can be achieved without reaching out to their rural fellow Malaysians, and there is a surge of consciousness among the iPad-totting, Starbucks-sipping crowd about “the other Malaysia” that has little access to independent online news and analyses. Some of the rural districts don’t even have electricity coverage, as 33% of Sarawakians living in the dark can testify.

Are the rural communities’ swing towards BN merely the result of cash and rice handouts and mainstream media propaganda, or is there a deeper reason that we in more privileged positions do not fully understand?

For the rural folk, you need to be on foot and in their faces. Not just before the elections but all year around […] The rural folk have no time for promises with nothing to back them up. It is a different mindset — they have so much more to lose than the monied upper-middle class person who could easily just find better pastures overseas.

If we are really sincere in helping the poor get out of the poverty trap and reach greater political awareness, we must first walk in their shoes and help them gain the strength to withstand propaganda and vote buying.

Ruled by a minority-picked government

Polling day may be over but election fever is still strong. 120,000 Malaysians gathered in and around Kelana Jaya stadium on Wednesday to protest the election results. Despite the short-notice and rainy weather, the stadium was packed to the rafters and the surrounding roads clogged in perhaps the most jubilant traffic jam ever in the Klang Valley, with stuck motorists of all races winding down windows and engaging in good-spirited banter.

Urban Malaysians, at least, appear determined to repudiate the churlish comments of sore winner PM Najib. Najib called for “national reconciliation” but in the same breath contradicted himself by putting the blame for his poor election showing on a “Chinese tsunami”. Later, he supported Utusan Malaysia’s racist comments, which the police are investigating under the Sedition Act.

Poll observers declared the elections were only “partially free but not fair”, tarnished by issues including media bias, abuse of government facilities and lack of integrity in the electoral roll. Whether the authorities will initiate an investigation remains to be seen, and there are calls for all to move forward with the current reality. The situation is opaque. But one thing is clear: our journey to a better Malaysia is just beginning. If the EC and election process is not overhauled, and if we don’t reach out to our rural fellow Malaysians, we might never break away from being ruled by a minority-picked government.