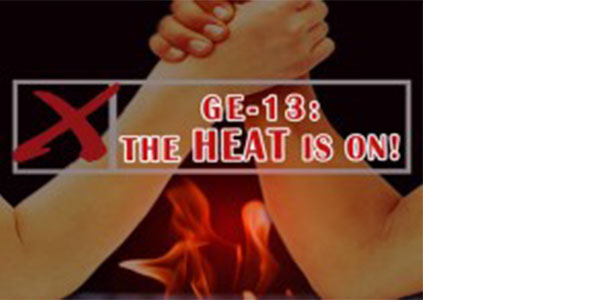 Waiting for polling date next

Parliament is finally dissolved, and the 13th general election is round the corner. The long-awaited announcement by PM Dato’ Sri Najib caught nobody by surprise really, as Malaysians have been in election mode for more than a year. One can say the pronouncement is almost an anti-climax – BN and Opposition party flags were already up long before that, at every corner of the street.

Najib’s announcement can be likened to a war-cry, with both BN and PR already clad in battle gear. With 222 federal seats and 505 state seats up for grabs, it is a do or die situation and nothing will be left to chance. Najib and Opposition leader Datuk Seri Anwar are eyeing the spoils, which for the incumbent means being officially recognised as head of the nation, and for the challenger a shot at being commander-in-chief. The winner takes all.

But Anwar may not be the only contender for the PM’s post. There are murmurs on the ground that DPM Muhyiddin Yassin is also eyeing the top position though he himself is tight lipped, preferring to play his cards close to his chest. If BN wins, there is no guarantee that Najib will not be unseated by his own party. They “can change their head of government midway without going to the polls again”.

After such a long wait, Malaysians can now be certain there’s going to be an election in the next few weeks. But there’s more waiting in store as it is going to take time for the Election Commission (EC) to decide on the nomination and polling dates. Apparently the procedures are lengthy. Let’s hope the EC makes an announcement soon as, frankly, everyone is tired of playing the waiting and guessing game.

This election is not only going down as a hotly-contested affair but it holds some significance for Najib who is finally seeking an official mandate from the people. Better late than never, yes? Or could it be just a little too late?

To add spice to a long overdue election, Anwar has issued a challenge to Najib to a public debate on “policies, economic or social”. Alas, the general view is that he’s wasting his breath, if past events are any indication. Waiting for public debates on policies is like waiting for that elusive manna from heaven.

A look at events after PM Najib took the helm and PR took control of four states will reveal some marked differences in both BN and PR’s policies. Financial services group Morgan Stanley says PR is focused on “decentralisation of power” and “equitable distribution and redistribution of resources”, and aspires to give priority to the people and not corporations.

According to Institute for Democracy and Economic Affairs (IDEAS) CEO, Wan Saiful Wan Jan, PR is pushing for “wealth distribution” whereas BN is more interested in “wealth creation”. He claims that BN’s many cash handouts could turn the country into a “welfare state”. Also, under BN, affirmative action for the Malays will continue while PR is ready to replace it with a needs-based policy.

The slew of economic and political reforms initiated by Najib have won praise from some quarters, whilst open tenders and a green policy practised by Selangor and Penang, two states under PR, have produced positive results and are hailed by many.

We have some inkling of the policies of these two parties, and perhaps this knowledge will guide us to make the right decision at the ballot box. We will know soon enough whose policies are more appealing.

The heat is on

Violence, insinuations, scandals, finger pointing, and accusations and counter-accusations have made politics come alive the last one year, and they’re not about to disappear anytime soon. In fact expect more dirt and aggression in the next few weeks. In light of the recent attacks on PR leaders, Datuk Seri Anwar reiterates the call for a clean election, asking BN to “observe basic ground rules” and the authorities to act against violent perpetrators.

His words are echoed by Datuk Ambiga Sreenevasan who is calling for “a level playing field for all contesting parties”. This is like asking for the moon, unfortunately. Those currently in power will decide how ‘level’ they want the field to be. Datuk Ambiga also points out that the many discrepancies in the electoral roll have not been resolved, and phantom voters are a major concern, especially in Sabah and Sarawak.

It is strange that the Election Commission keeps playing down these concerns. Any responsible body will go all out to ensure everything is in place before an election; why wait for the public to remind it to get its act together.

Campaigning is starting but Najib’s concentration may be at under threat. He may not be as ‘free’ as he would like to be to give his all to his coalition as his mind may be preoccupied with the unresolved 2006 murder of Mongolian model, Altantuya Shaariibuu. There has been a call from the Bar Council to reopen the case.

According to the Council, there is sufficient evidence to call the PM and his wife to clear the air over their alleged involvement in Altantuya’s merciless execution. The attorney-general was asked not to be selective in dispensing justice and to stop being “subservient to the office of the prime minister”. The Bar Council shouldn’t hold its breath though. Such calls have always gone unheeded.

With the election upon us soon, expect the opposition to capitalise on this subject. It will be good ammunition, C4 included, to bring down the ‘enemy’.