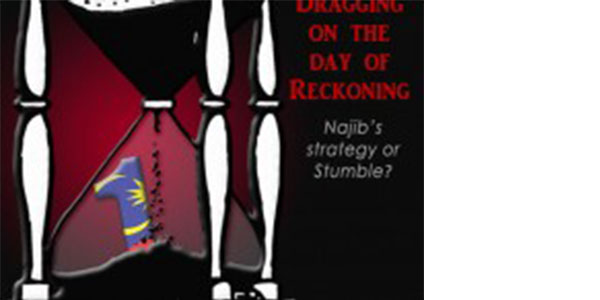 Polls delay: Is Najib dragging his feet or calculating his steps?

Dato’ Sri Najib Razak is a record-holder. Besides being the longest-ensconced Prime Minister without his own mandate from the people, his dawdling in calling for the 13th General Elections has created another bit of history: for the first time in 56 years, since Merdeka, Malaysians saw the automatic dissolution of a state government. The mandate of the Negeri Sembilan legislative body expired yesterday on 28 March 2013.

Negeri Sembilan is now indisputably under the rule of a caretaker government. Minister Datuk Seri Nazri Aziz says a caretaker government has no power to make any new decision and agreement; but there are no official guidelines. In that respect, even Nazri is a caretaker: the constitutional expert Tommy Thomas said that BN’s political legitimacy is currently debatable, as the mandate of the federal government expired on March 8, five years after the last general elections.

We certainly need proper guidelines for caretaker governments, just as mature democracies like the UK, Australia and Canada have. In fact, a proposed set of dos and don’ts of a caretaker government had already been presented to parliament early last year, according to Member of Parliament for Rasah Anthony Loke, who is also a member of the parliamentary select committee for electoral reforms. The Elections Commission, however, has brushed off the need for clear guidelines.

Meanwhile, our (caretaker) Prime Minister is spending like there is no tomorrow. 2 weeks ago, RM2 billion was lavished on civil servants. Pension funds, fixed housing allowances, and gratuities for retirees were also promised to the 40,000 staff of government statutory bodies earlier this week.

Thomas suggested the polls delay as “an unmistakable signal that the government is frightened to meet the electorate”. But, it might be that Najib is not actually dragging his feet, but calculating his steps. Free Malaysia Today postulated Najib may hold the Negeri Sembilan state elections first before dissolving parliament as a strategic move to “stymie the opposition”. The news portal opined that a BN win in that state, where it is perceived as weak, will boost its chances in the national polls.

Is Najib in two minds or will he be three moves ahead by dragging on the day of reckoning? One way or another, the delay may cost him, as the rakyat grows more and more frustrated in the never-ending wait to elect a legitimate government.

Bullies or ‘victims’ of provocation?

The silence from top BN leaders on the thuggish behavior of their followers is deafening. No amount of rhetoric on “reforms” can help if abuse is continuously carried out in one’s name. Take the most recent case of our Home Minister, who is in charge of the police, keeping mum when UMNO supporters openly shouted “Kill Tian Chua” right in front of him. Tian Chua is a PKR vice-president, whose comments on the situation in Sabah have rankled the powers-that-be.

Bersih co-chairperson Datuk Ambiga Sreenevasan urged the Home Minister to condemn the political violence leveled by his own supporters. Making death threats is actually an offence under the Penal Code. However, Hishammuddin, instead of enforcing the law, blamed the increasing political violence on opposition provocation.

Mature, intelligent people do not rise to provocation so easily though, thus Hishammuddin’s deflection only bounces back at his own supporters. What does the high frequency of rowdy disruptions at Pakatan events say about BN groupies? In the past month alone, pro-BN groups had attacked the car carrying Tian Chua, hurled sticks and eggs at PKR supporters, and threw rocks and other projectiles at PKR’s “Jelajah Merdeka” bus – all under the watchful eyes of the cops.

The mainstream media’s blanket coverage of BN feel-good propaganda is apparently not enough.

In February, PM Najib’s administration is the biggest advertisement spender in Malaysia. The Prime Minister’s Department (PMO) forked out RM36 million on advertising, trumping even consumer products giant Unilever, which only spent about a third of that. BN itself reportedly blew another RM4.9 million to toot its own horns.

When a government spends more public funds on advertisements than a consumer products multinational company, even though it has a whole troop of mainstream media at its command, you can tell that it is feeling the heat. Unfortunately, you can’t buy people’s confidence if you hardly practice what you preach.

This week, the media industry mourns the loss of newsman Zainon Ahmad, affectionately known as Pak Non. The late consultant and political editor of theSun passed away due to liver cancer, ending 35 years of service in journalism.

He is remembered by many for his down-to-earth personality. In 2002, he was also the editor-in-chief that led theSun to re-launch as a free paper, offering Malaysians one of the very first tastes of independent news amidst a media industry hogged by government mouthpieces.

REFSA is deeply grateful to Pak Non for his unwavering spirit to tell it as it is. Read The Nut Graph’s conversation with him last year, as he recounts growing up amidst Hindu deities and Bible studies, his misgivings with racial boxes on forms, and his belief in Malaysia.