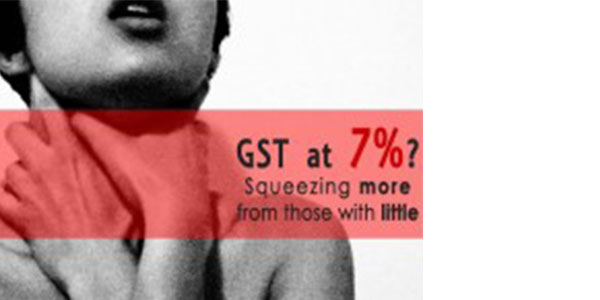 GST: Squeezing more from those with little

Prime Minister and Finance Minister Dato’ Sri Najib Razak has barely warmed his seat in the office but is already firing up the grill for goods and services tax (GST). Minister in the PM’s department Datuk Seri Idris Jala is eager to implement GST, and seemed to suggest 7 percent as a start. Idris says this would pump in an additional RM27 billion into government coffers and help the federal government deliver its promises as per the BN manifesto.

Business people, financial experts and lawmakers have expressed dismay. Associated Chinese Chambers of Commerce and Industry of Malaysia (ACCCIM) said that starting off at 7 percent is too risky. Too high a percentage will cause inflation, say experts, citing the example of Singapore where the inflation rate shot up when it implemented a 3 percent GST and took 3 years to come down to pre-GST levels. Kelana Jaya MP Wong Chen pointed out that the existing tax base is small not because of tax evasion, but because most Malaysians are too poor to pay taxes. Currently, only 1 in 6 Malaysians earn incomes high enough to be taxable.

Wong reasoned that Najib’s previous hints that corporate and income taxes would be cut to offset GST “will only help the rich”. Perhaps the government should go after the big players instead of squeezing dry the tiny wallets of the rakyat. In fact, PAS Youth chief Nasrudin Hassan claims the Finance Ministry confirmed that “the government has failed to collect corporate debt of RM53 billion from YTL group, RM34 billion from tycoon Syed Mokhtar Al Bukhary’s group” to name a few.

REFSA maintains its stand that Malaysia is not ready for GST. About 80 percent of Malaysian households qualify for the BR1M cash handout – this means that by the government’s own standard, the overwhelming majority of Malaysians need financial aid. Moreover, we believe BN can fulfill its manifesto of over 150 promises by tackling the wanton wastages and corruption that are bleeding our coffers dry. Penang Chief Minister Lim Guan Eng estimates that 7 percent GST will burden each Malaysian by RM1,000 per year. If that is the case, BN’s election promise of a RM1,000 BR1M handout sounds like a bad joke on everyone.

Three-times the moolah for Taib

At the other end of the wealth spectrum, Sarawak Chief Minister Tan Sri Abdul Taib Mahmud, reportedly richer than the Queen of England, is getting a three-fold pay hike. So are his Cabinet members and lawmakers. The state’s Second Finance Minister Datuk Seri Wong Soon Koh claims that the increased salary is due to the rising expectations of the people, as well as the large territory that Sarawak covers. The pay rise, backdated to 1 January 2012, would involve some RM17 million.

So while poor Malaysians tighten their belts for GST, the federal government rewards a minister who is linked to illegal land deal scandals that have gained international attention, and who has thumbed his nose at the “naughty” Malaysian Anti-Corruption Commission (MACC).

Recently-released analysis shows that Pakatan Rakyat won in 59 mixed-race federal seats, almost double its 30 wins in Chinese-majority seats in GE-13. In other words, the “Chinese tsunami” that Najib blamed for BN’s dismal election results does not hold water. It was a Malaysian tsunami.

PR losing the elections despite getting the majority vote has ignited the call for the Election Commission to redraw constituency boundaries, which currently allows BN to form the federal government with just 17 percent of the popular vote. However, the redelineation process itself is in dire need to be overhauled, or unfairness will continue to permeate the elections. BN gains 60 percent of the popular vote right after each redelineation exercise, revealed Universiti Malaya Centre for Democracy and Elections (Umcedel) deputy director, Amer Saifude Ghazali. He further pointed out that there are no clear guidelines or mapping to guide the redelineation process.

If only police would be deployed against real criminals…

18 people at a candlelit vigil to show solidarity with arrested student activist Adam Adli have been detained for allegedly “participating in an unlawful assembly”. This comes after the stern warning from newly appointed Home Minister Datuk Seri Dr Ahmad Zahid Hamidi that the ministry will “act tough” against individuals who disrupt public order. Shortly after Adam is charged with sedition in court, Batu MP Tian Chua, activist Haris Ibrahim and PAS member Thamrin Ghaffar (son of former deputy prime minister Tun Ghafar Baba) have also been hauled up under the Sedition Act./span>

Zahid declared that action taken by the ministry must not be regarded as politically motivated as it was based on the existing laws of the country. Unfortunately, BN’s track record of implementing our laws is not convincing – the previous Home Minister Datuk Seri Hishammuddin had twice been regarded by the judiciary as ‘irrational’, once for declaring the Bersih movement illegal and the other time for rejecting the publishing permit application of independent news portal Malaysiakini.

It is indeed difficult to imagine how a candlelight vigil can be so ‘disruptive’ as to warrant a crackdown. Four sedition-related arrests less than three weeks after ‘winning’ the election is certainly unbecoming of a new, unpopular government, which should be working to gain majority support. Police resources should be used to fight real criminals instead, rather than enforcing a law that Najib last year announced would be repealed. REFSA Rojak reader Joachim Leong has this to say:

“While you may not agree with Adam Adli’s views or methods, charging citizens under the archaic and open to abuse law of sedition is not the way forward. A measured approach of rational discourse and improving itself would not be too much to ask, would it?”

On that note, we shall wrap up Rojak and take our mixing bowl and mélange of zest to different pastures. Thank you for reading, and keep on reading between and thru the lines of the spin and propaganda that permeate our daily news feed. Most importantly, do your part, big or small, to help keep our ‘rojak’ nation on the path of progress.

If you think you’re too small to make a difference, try sleeping in closed room with a mosquito.