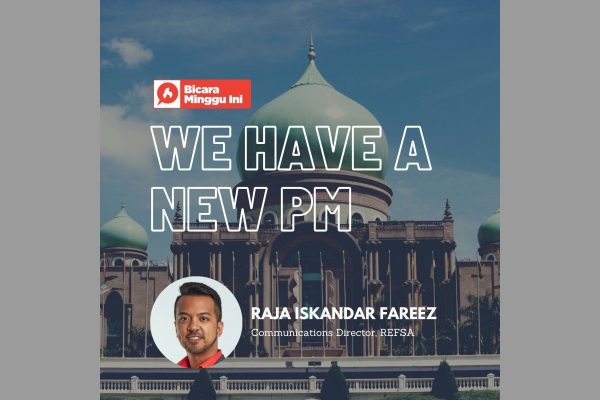 Listen to this podcast (38 minutes) on Spotify: click here

As the next chapter of Malaysian politics begins, REFSA Communications Director Iskandar Fareez discusses with Norman Goh on what we can expect from Malaysia’s 9th Prime Minister, Ismail Sabri Yaakob.

From the onset, with a razor thin majority, Ismail Sabri’s government seems shaky. Like the former Prime Minister (PM), he will be desperate to ensure that he can maintain support in any way possible, at least enough to remain as PM until the nation is ready to head to the general election.

Ironically, the fiercest pressure that he faces comes from his own allies. If he does not sufficiently satisfy the demands of partner parties while adequately balancing the interest of his own party (UMNO), then he could be facing the risk of losing their support. Bersatu or even other allies can just pull their support, which will then cause the collapse of Ismail Sabri’s government, mirroring what had happened to Perikatan Nasional 1.0.

This leaves him with 2 vastly different choices – One option is to follow the footsteps of the previous PM by using a carrot and stick approach, aiming to accumulate a comfortable majority in parliament. This involves distributing the “spoils of war” among allies, dishing out ministerial posts and GLC positions in hopes that they continually support his leadership. At the same time, he can try to induce defections from his opponent’s side in hopes that this can shore up his support in parliament. Unfortunately, this tried and tested method has shown to be unsuccessful in keeping Muhyiddin in power.

The other option is to extend the olive branch to the opposition, working towards a confidence and supply agreement that will effectively keep Ismail Sabri’s internal rivals in check. The only way for this to work is if the Prime Minister offers significant concessions which includes genuine bipartisan effort in Covid-19 management, curtailing the power of the executive branch while empowering the parliament as for co-governing and numerous other reforms that will strengthen Malaysia’s democratic institution.

Curtailing Executive Powers of the PM

Looking back, the series of power struggles and the ensuing political instabilities stem from the overwhelming power that is concentrated in the hands of the Prime Minister. This has led to and became the factor of a “winner-takes-all” political culture where whoever assumes this role can use this almost limitless power to strengthen and bolster his or her own political position.

This practice of presidential premiership is a legacy of one-party state era where a dominant ruling party, like UMNO, will play the role of big brother among the ruling coalition. Such a concept might have worked in the years where UMNO won a large number of seats and Barisan Nasional, as a coalition, commands a comfortable majority.

However, as our democracy matures and evolves into a multi-party system, this reality no longer applies. No party can claim dominance as all of them will have similar strengths. In fact, if any party tries to employ the same machinations to attain dominance, not only will such gambit be futile but it will only lead to further political instabilities.

Thus, it is in the interest of the new PM, Ismail Sabri, to break the cycle of pursuing political dominance. Instead, he should try to commit to strengthening Malaysia’s democratic institutions. While political stability in the conventional sense may be elusive in a multi-party political system, he can aim to at least form a functioning political order by working together across the aisle to formulate policies and programmes that can benefit everyday Malaysians.

When asked how Pakatan Harapan should act moving forward, Iskandar comments that it should prepare for the next election and create a cohesive platform to push forward its legislative agenda. PH should not be reactive anymore, and more effort has to be done in order to present a united front for the voters. Iskandar floated the idea of a cross-party shadow cabinet, and to create an agreement of what PH, as a coalition, stands for in terms of legislation and policy. While the PM has his own agenda, his narrow majority means that PH has considerable sway to introduce its own agenda in parliament.

Listen to this podcast (38 minutes) on Spotify: click here