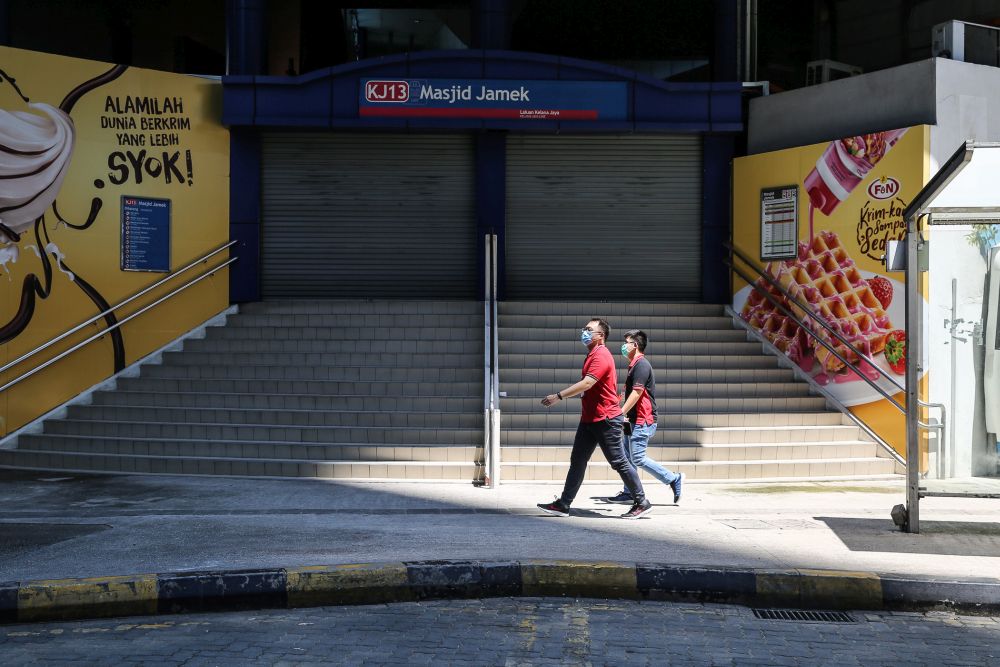 KUALA LUMPUR, March 25 — Two think tanks have suggested that a significant stimulus package amounting to nearly 10 per cent of GDP is needed to keep the Covid-19-hit economy from tanking.

Just how much exactly is needed may vary, but both Research For Social Advancement (REFSA) and the Malaysian Institute of Economic Research (MIER) agreed that the stimulus must be at least over RM90 billion. The government has only unveiled a package worth RM26.5 billion to date.

REFSA looked at the stimulus packages disbursed by Western governments and China to base its calculations on.

It estimates the movement control order could incur losses of up to RM150 billion, citing the calculation done by economist Pierre-Olivier Gourinchas, who said a 50 per cent drop in economic activity for a month and another quarter the two months after would see GDP growth drop by almost 10 per cent.

“In order to counter this, to ‘flatten the curve’ of the recession as he calls it, Gourinchas calls for fiscal measures to compensate for all lost income in the initial stages of the contraction,” said the report’s authors, Tan E. Hun and Ivy Kwek.

“The cost of this will obviously be huge. As illustrated above, we should assume that it would amount to 10 per cent of GDP. For Malaysia, this would mean a fiscal package of RM150 billion.”

But REFSA said initial numbers coming out of China seem to bear out this estimate. Industrial output dropped by 13.5 per cent in the first two months of the year. Urban unemployment soared, retail sales dropped by more than 20 per cent, and investment by 25 per cent.

“These figures are unprecedented, and significantly worse than what was seen during the global financial crisis of 2008,” the report warned.

“Altogether, Chinese GDP could see a fall of 13 per cent for January and February, and the drastic lockdown measures only started on January 23rd.”

MIER in a report on the economic impact of the novel coronavirus estimates that around 2.4 million Malaysians could lose their jobs due to the Covid-19 crisis should the movement control order be extended for just two more weeks.

Most of it would consist of non-salaried jobs, with unskilled workers forming nearly two-thirds of the layoffs. It also estimated household income to drop 12 per cent from the baseline with consumer spending expected to decrease by at least 11 per cent.

This would amount to RM95 billion in losses or nearly 7 per cent of GDP relative to the 2020 baseline, which means the economy could shrink by -2.9 per cent.

“In these challenging and unprecedented times, it will be in the nation’s best interest to depart from looking at the economy based on the conventional indicators in normal times,” MIER said, echoing criticism leveled against the fiscal measures announced by the Muhyiddin government.

The government, both Perikatan Nasional and its deposed predecessor Pakatan Harapan, has so far announced two stimulus packages and is expected to unveil a third by month-end.

The stimulus announced at the end of February only amounted to RM20 billion, and some of the measures, like discount vouchers for domestic tourism, are no longer applicable under the MCO, REFSA noted.

The second round of stimulus worth RM650 million was announced earlier this month by PN Prime Minister Tan Sri Muhyiddin Yassin, which included discounts on electricity bills and delay in tax collection.

A third followed soon after although only partially. Among measures announced was the unlocking of RM40 billion of private retirement funds for all contributors below the age of 55.

Detractors quickly denounced the measure, questioning why workers are forced to tap into their pensions when the government should have pumped cash into their pockets instead.

All the measures announced to date seemed to be just a fraction of what most countries have spent to keep their economies afloat, REFSA noted.

The United States, for example, is currently debating a stimulus package of some US$2 trillion (RM4.4 trillion), or roughly 10 per cent of its GDP. Even the stimulus package rolled out during the Global Financial Crisis in 2009 was RM60 billion, it said.

At the moment, economists feel the measures announced by the PN government so far suggest it is keen on maintaining a healthy deficit, although they argue that there is still fiscal space to allow for a stimulus large enough to support businesses and retain jobs.

REFSA suggested financial support to compensate all lost income for businesses and individuals.

“Most of the measures proposed in the previous stimulus package are valid, but generally speaking they need to be increased in size and expanded in scope to cover the entire economy, not just selected sectors and workers,” it said.

And economists have also cautioned against directing the stimulus to bail out politically-linked companies.

“Care should be taken to avoid the situation where losses are socialised and profits privatised, as happened in 2008.

Support for companies should come with clear conditions, first of all a guarantee to maintain employment of all workers.”