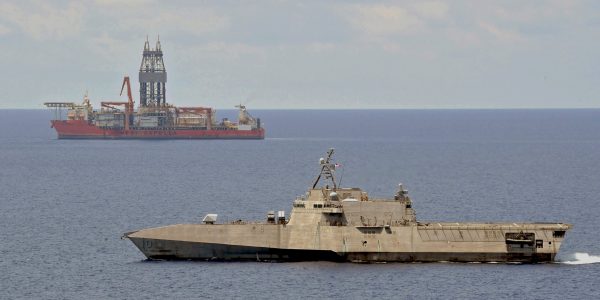 Indonesia and Malaysia increasingly depend on their coast guards to assert maritime sovereignty, but these forces don’t have agreed-upon regional rules of behavior to keep clashes with China over fisheries and energy exploration from escalating into crises, three South China Sea experts said Monday.

Yet despite the “front-line role” coast guards play in handling incidents like last spring’s Chinese coast guard and naval militia tailing of a Malaysian-contracted energy exploration vessel in disputed waters, they take a back seat to diplomacy and the military, Amanda Hsiao, a Beijing-based project manager for the Centre for Humanitarian Dialogue, said during an online Center for Strategic and International Studies event.

That incident, said Ivy Kwek, Research Director at Malaysia’s Research for Social Advancement, highlights the difficulties a country like hers faces.

“Malaysia recognizes the United States’ role in freedom of navigation” operations to push back against China’s excessive Nine-Dash Line claims to almost all of the South China Sea, but she added that U.S. FONOps are perceived to be undertaken in the context of a Washington-Beijing confrontation rather than in terms of support of a nation like Malaysia’s sovereignty.

In May, three Navy warships conducted presence operations near the contracted vessel to ensure its work could continue. Earlier, an American amphibious assault ship, cruiser and destroyer and an Australian frigate operated nearby to deter Chinese harassment.

In part because of a change in government, Kwek said Malaysia has “been taking concrete steps in preserving its sovereign rights” by “strengthening its security relations with Australia, New Zealand and India.”

Reaching out to regional powers other than the United States has paid some dividends in dealing with Beijing, which remains the dominant economic power in the Indo-Pacific.

“China appears to be softening its stance” on actively confronting Malaysia over the extent of its continental shelf, she said, but she stressed this does not translate into Kuala Lumpur wanting to compromise on the matter.

In December and January, Indonesia was the target of China’s “increasingly bold claims to [Jakarta’s] traditional fishing grounds,” Greta Nabbs-Keller, research fellow at the Centre for Policy Futures at the University of Queensland, said during the event. A Chinese coast guard ship led 60 fishing vessels into Indonesian waters. The tensions between the two nations over fisheries hasn’t dropped off as Jakarta accuses Beijing of human trafficking and abusing Indonesians working on Chinese boats.

Historically, “Indonesia has had a troubled relationship with China” that has grown more complicated with COVID-19’s impact on the economy, the future of infrastructure projects and strong anti-Communist political past.

For years, “Indonesia has been [using] a hedging against China strategy” and a refusal to talk about its territorial claims. With the largest military of the ASEAN countries, Jakarta can “outgun” Chinese naval militia if shooting breaks out in a confrontation, as it threatened to do this winter in the fisheries confrontation, Nabbs-Keller said.

While welcoming freedom of navigation operations like USS Gabrielle Giffords’ (LCS-10) presence during the Malaysian standoff as a demonstration of American commitment, she said, this also means “Indonesia cannot escape the escalating strategic rivalry” between Washington-Beijing.

ASEAN countries have for years tried to keep a balance between the two powers.

The Trump administration in July said that it would no longer stand by idly when China uses “gangster tactics” to force its will on its neighbors. The United States “will not let China claim the South China Sea as its own,” David Stilwell, the State Department’s top official for the region, said. This was a major shift in policy from not choosing sides in territorial disputes.

The pandemic has forced a delay in a meeting between ASEAN and China to refine the wording of a code of conduct meant to handle maritime disputes. While weak, the panelists said, the proposed code would at least keep Beijing talking rather than bullying to get its way.

Hsiao said there are models that could be useful to ASEAN and China in reaching an accord on maritime issues. She specifically cited a coast guard agreement between Russia, a dominant power, and its neighbors covering law enforcement, fisheries and behavior at sea in the Baltic Sea.

“China is trying to demonstrate a responsiveness to concerns it hears from ASEAN” now as all are recovering from COVID-19 outbreaks. But Hsiao added, “the clock is ticking” when it comes to reaching accords on illegal fishing and necessary environmental controls between all the nations bordering the South China Sea.