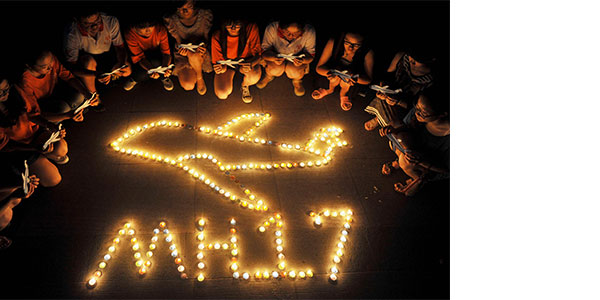 In the midst of grieving for the victims of the MH 370 and MH 17 flight tragedies, pertinent questions remain unanswered of the Malaysian government’s handling of both cases. Closer scrutiny shows why the need for institutional overhaul for Malaysia is long overdue.

2014 has not been an easy year for fellow Malaysian. While the nation was still grieving over the loss of MH370, Malaysia was struck by another air tragedy – the shooting down of flight MH 17 in Ukraine.

The two air tragedies which involved Malaysian Airline System (MAS) took place within a span of a four month period, causing much sorrow to Malaysians. The tragedies have also put a huge dent in the government’s Visit Malaysia Year 2014 plan which had aimed to boost up the number of visitors to the country.

Indeed, no high rank officer has even talked about Visit Malaysia Year anymore, given the fact that Malaysians and foreigners are haunted by the tragic accidents.

Certainly, the tragedies are unprecedented in nature. However weaknesses in Malaysian government are something that we should not also overlook.

Immediately after the MH17 tragedy took place, the Najib administration reacted swiftly and demanded for the culprits who shot down the MH17 to be brought to justice, having seemingly learned from the MH370 tragedy. Moreover, unlike the MH370 tragedy, Najib took the initiative almost immediately after the event to convene an emergency parliamentary sitting to debate the issue.

Honestly, Najib should be praised for utilising Malaysia’s advantage of being in a neutral position in regards to the Ukrainian and Russian standoff by making a deal with the Ukrainian rebels to bring back the airplane’s black boxes, victims’ bodies and being granted access to the crash scene. In this sense, Najib has spoken out what Malaysians want.

Ironically, Najib has never demanded the persons who let MH370 fly across Peninsular Malaysia without being intercepted be brought to justice and also convened an emergency sitting fo this.

Although Najib claimed he couldn’t sleep for the first two days as there was tremendous amount of pressure to handle the liaison job with international leaders, his foreign affairs staff seemed sluggish when compared with foreign counterparts who represent the victims’ countries.

Despite the fact that Malaysia had more passenger deaths than United Kingdom and Australia, it was the UK who asked for the convening of United Nations Security Council emergency meeting to discuss the MH17 matter and it was Australia who drafted the United Nations resolution to condemn the shooting down of MH17. Many are beginning to doubt the capabilities of the Malaysian Foreign Minister now. Malaysia can do more than what we are currently doing now.

It will be ignorant of us if we think that the standoff between Ukraine and Russia has nothing to do with us anymore after getting back the black box and bodies. Let us not forget that Malaysia was once one of the leaders of the Non Alignment Movement and also very outspoken in the international arena. We should not give up on this legacy of our foreign affairs, which is an asset.

Meanwhile, the credibility of the Malaysian government is at a critical low in the aftermath of the MH 370 tragedy. The missing flight MH370 was partly due to the inaction of our armed forces and weaknesses that existed within the Immigration department and Department of Civil Aviation. Yet, no one has been held accountable for the faux pas till this day.

Why did the Malaysian government act differently in these two tragedies? Why didn’t the Malaysian Air Force intercept MH370? The answers provided by the government may have satisfied the docile and pliant local mainstream media but certainly not for the outspoken foreign media such as New York Times and Bloomberg.

The very fact that the Malaysian government has been living in a comfort zone for decades has resulted in the government being unable to handle criticism, not to mention having the confidence to accept public scrutiny.

The contributing reasons are multi-faceted but the main culprit is the fear created by the presence of draconian laws inherited from the Emergency Period. The Internal Security Act, Printing Press and Publication Act, Police Act, Universities and Universities Colleges Act and other oppressive laws have contributed to the declining of freedom of media and speech and restricted development of civil society.

Despite several occasions which prompted the necessity for repealing these suppressive laws, the government chose to maintain its business-as-usual stance.

The end of the insurgency war against the Malayan Communist Party in the late 1980s should have been the catalyst to review all the measures implemented during the emergency era. However, the government found the suppressive laws to be a useful double-edged sword to quell dissent, even legitimate ones.

These laws could be used to stabilize the security situation but also was able to stifle dissent to create an environment that would result in the lack of public scrutiny and institutional check and balance. This is a strong temptation for any regime. Obviously, the Mahathir administration did not resist the temptation and subsequently missed the opportunity for reforms.

However, another opportunity came when Abdullah Ahmad Badawi assumed the premiership in 2003 which was followed by the overwhelming 2004 general election result which saw BN win 198 out of 222 parliamentary seats.

At that time, Malaysians had anticipated that the landslide victory would enable Badawi to turn Malaysia over a new leaf by repealing all the draconian laws and undertake political reform. But the then Prime Minister did not fully utilize the precious opportunity gifted him but wasted it instead.

Although some of the suppressive laws were repealed eventually due to the mammoth pressure mounted by people to the government, the core suppressive principles have been maintained and even implanted into the new laws.

For example the Peaceful Assembly Act, drafted after the BERSIH 2.0 rally, attempts to prohibit Malaysians from holding a peaceful assembly without getting police approval. And the government’s power of preventive detention has been resurrected in the Prevention of Crime Act.

Yet the colonial-era Sedition Act has remained and continues to serve as another powerful tool to gag citizens’ voice. The ruling government has remained in the same state for the last five decades.

On the one hand, the MH370 and MH17 tragedies have grieved Malaysians. On the other hand, it has taught the ruling government a lesson that its current administrative style is no longer relevant or competent in this modern era.

Hiding in its comfort zone will not help it grow. The tragedies may not be deemed as the third opportunity, but it certainly has alerted the government that it is time to leave the comfort zone and embark on real reforms.