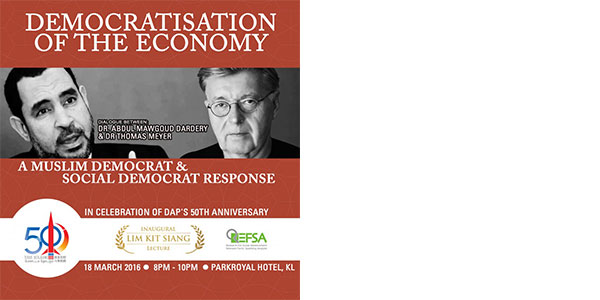 Democratisation of the Economy: A Muslim Democrat and Social Democrat response

About the event
DAP@50 and REFSA are proud to bring together distinguished German economist Thomas Mayer and eminent Egyptian academic Dr. Abdul Mawgoud Dardery to discuss the democratisation of the economy from the perspective of a Muslim democrat and a social democrat.

Such a dialogue is critical, in light of the need for more rational discourse to counter the right-wing drumming of extremist agenda in times of economic and political instability. At a time when most majority Muslim societies are experiencing economic and political transition, Islamism is a force that is gaining much currency in most Muslim societies around the world, Malaysia included.

While Muslim democrats grapple with the need to assert more broadly defined Islamic values (as opposed to narrow, parochial ones) that suit the needs of the modern world; social democrats are struggling to seek just distribution of economic growth in a globalised world where capitalism and neoliberalism is the order of the day.

There are potential synergies and common goals with social democratic values and policies, because of the correlation that intertwines economic disparity and radicalism. There is a great need to address the issue of sustainable growth and economic justice to balance the challenges faced by political instability.

Background
A DAP delegation led by DAP Parliamentary Leader Lim Kit Siang visited Jordan, Egypt, Tunisia and Turkey in 2015 and engaged with leaders of political parties and movements, think tanks and civil society groups. The objective was to understand the diverse ways in which these societies cope with contemporary political, economic and social challenges, with particular regard to the role of Islam in all these aspects.

As a result from this exchange, Lim saw a need to bridge the gap between Muslim democrats and social democrats, and Malaysia is well-positioned to play a facilitating role in this regard. Lim is a veteran Malaysian opposition politician for half a century. He is also a key leader of the Democratic Action Party (DAP) of Malaysia, which celebrates its 50th year in 2016. This lecture series is held to commemorate the party’s founding.

Speakers’ profiles
Dr Thomas Meyer holds a PhD from Frankfurt University, his fields of specialization in research include Comparative Social Democracy, as well as Religious and Political Fundamentalism. He has authored over 30 books and 150 articles on various topics.
He lectured Political Science at the University of Siegen and University of Dortmund, later taking up tenureship as Visiting Professor and guest lecturer at numerous universities, particularly in South-East and East Asia. Dr Meyer was Academic Advisor to the European Commission for Social Sciences and Editor-in-Chief of several political-cultural magazines.

Dr Abdul Mawgoud Dardery is an “academician by profession and politician by necessity”, as he says. As a Member of Parliament in Egypt of the Freedom and Justice Party he serves on the Foreign Relations Committee.
Dr Dardery holds a PhD from the University of Pittsburg; his dissertation focused on “Euro-centrism vs. Islamism”.